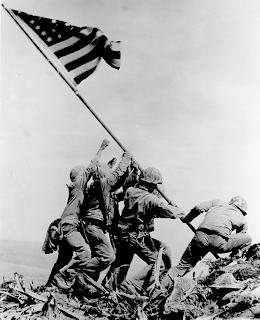 On Sunday night, I settled down in front of the tv to watch "Flags of our Fathers" a film that, together with its companion piece "Letters From Iwo Jima", I had stuck onto Sky+ nearly a year ago.  Clocking in at a little over 2 hours and centering around a bloody assault by US Marines on a Japanese Island during the Second World War, this film is not exactly in the tradition of  lightweight Sunday evening entertainment.

"Last of the Summer Wine" this definitely is not.

What it is, though, is an unflinching portrayal of what it is to be at war and how the survivors cope with the memory of the things that they have seen and the guilt that they lived where other, maybe better people, died.

The film centres around the stories of the six men who raised the US flag above Mount Suribachi during the assault on Iwo Jima.  It was, in fact, the second flag to be raised, but this one was immortalised in an iconic photograph that was used to raise money for the war effort and seemed to show the weary American people that victory was possible with a final push.  Much of the film deals with the guilt that the survivors felt that the real heroes, who raised the first flag, were all dead.

As you might expect from a director like Clint Eastwood, this film is no whitewash affair where the glorious US army wins the war single-handed.  The war portrayed here is bloody and confusing, and we see thousands of young Americans being slaughtered as they try to gain a foothold on a barren lump of rock in the Pacific.  Although the US Government makes heroes of the three surviving flag raisers, the film makes it clear that, although many men acted with astonishing bravery and fortitude under horrific circumstances, war does not make you great.  War is horrible and bloody and wasteful.  War kills young men in a variety of unpleasant ways and forces reasonable people to act in unreasonable ways towards other human beings.

How jarring it was when this beautiful, moving film was interrupted every half an hour or so by adverts for computer games simulating war, where you could command an army and rain death and destruction upon your opponents.  Yeah!

I've played and enjoyed games like this myself, so far be it from me to climb too far onto my high horse, but as I watched the telly on Sunday evening, these adverts felt uncomfortably like they were glorifying war and belittling sacrifice in a way that Eastwood's film was not.

I looked the film up on IMDB this morning, and saw that there was a discussion about what had actually happened to Iggy, a character who disappears from a fox-hole and is found dead in a cave several days later (played in the film by Billy Elliot himself, Jamie Bell).  The film skirts around the issue, whilst making it clear that whatever happened wasn't very nice.  The film is dealing with real people and real events, however, and wikipedia isn't so coy.  I learned that when they found him:

"Both his arms were fractured," Langley [an eye-witness] said. "They just hung there there like arms on a broken doll. He had been bayoneted repeatedly. The back of his head had been smashed in."
Other eyewitness reports further indicated that Ignatowski had been tortured in the cave by the Japanese for three days, during which time they also cut out his eyes, cut off his ears, smashed in his teeth, and cut off his genitalia.

Horrible, I'm sure you'll agree.  The discussion on IMDB focused on wondering how the Japanese could commit such an atrocity, as if the Japanese alone were responsible for committing acts like that in the context of a no-holds-barred war.  Clearly I'm not defending torture, but it's odd how war warps our moral compasses so much that it's somehow acceptable for someone to be disemboweled by shrapnel, mown down by a machine gun or torched by a flame-thrower (all graphically portrayed in the film), but it's not okay to be tortured like that (not portrayed in the film).  Where is the line of what  is and is not acceptable?  The 1949 Geneva Conventions are obviously an attempt to draw that line, but how relevant is it? Are all troops briefed in it and signed up to its application as they fight to survive on the front lines of a battlefield? Surely the very concept of rules for war is ridiculous? Or is it mainly used for after-the-event prosecutions by the winners?

"Letters From Iwo Jima" apparently tells the story of the assault from the Japanese point of view, and I'm very much looking forward to watching it.  After all, young innocent men died in horrific ways on both sides of the conflict and both sides had their own dead to mourn and heroes to celebrate, and we would do well to remember it more often.

As a great songwriter once sagely noted, "We always need to hear both sides of the story".  ALL sides would have been a better way of putting it, but even Phil Collins isn't infallible.
Posted by swisslet at 18:44

Email ThisBlogThis!Share to TwitterShare to FacebookShare to Pinterest
Labels: film, history and stuff