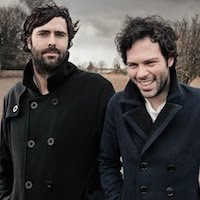 Back in the UK and -- thanks to LB -- straight back into the gig-going saddle with this intimate gig by a Keane side-project. I don't know how many gigs I usually attend in a year, but I think I've been to the grand total of one gig in 2010 prior to this one, and that was Lady Gaga, so not exactly typical. Obviously, I've been busy doing other things, but even so.... it's good to get straight back on it now that I'm back in the UK. I'm due to start work again on Monday morning too, for the first time since the back end of January, so it's good to have an excuse to think about something else for a few hours instead of sitting in front of the telly getting slowly more depressed.

I like the Social as a venue: it's small enough to be properly intimate, and in the past I've seen some pretty good bands here. White Denim (twice), Tina Dico, The Feeling, Jamie T..... You also occasionally get to mix with the talent in the bar downstairs as they get ready to go onstage. It almost doesn't matter who the act are (and I used to drink in the same pub as Shed 7 when I lived in York, a band for whom the term "talent" isn't often used unironically), somehow it's still a little bit of a thrill to be so close to someone you're paying to watch perform.

The last time I saw Mr Tickle out of Keane, Tim Rice-Oxley, together with guitarist Jesse Quin, was at the Nottingham Arena. The contrast between the Social and the Arena is quite big enough for me as a spectator, nevermind what it must be for the performers. I imagine that most artists spend their careers dreaming of playing to tens of thousands of people in massive venues, and it's a little strange to think that some bands who have made it clearly crave to get back to a time when they played much smaller gigs.

As Rice-Oxley revealed in an excellent (well done LB) recent interview with the Nottingham Evening Post:

"I love touring with Keane but I do have a hankering to be back as just the three of us hiring a van and finding the venues ourselves. It is an amazing thing to do and you do lose a bit of that when the tour becomes a huge machine. I just wanted to get back to that closeness amongst ourselves and with the audience."

As if to prove the point, when we arrive at the Social, guitarist Jess Quin is manning the merchandise stand next to the bar and chatting with fans. We're there quite early, but already there are a number of fans clustered around the tiny stage. Keane have received a lot of mockery throughout their career, much of it seemingly stemming from indie-snobbery, but they do seem to be the kind of band that attracts devoted followers. On Saturday night I'd watched a recording of the Libertines performing on Jools Holland back in the day, and had laughed at the young girls at the back who were clearly obsessed with the band. Keane, or rather Mt. Desolation here, seem to have attracted a similar kind of following. Well, I say similar, but instead of being 18 year-old girls (the kind of girls who were probably the reason that Pete Docherty and Carl Barat started a band in the first place), the ladies here are rather older and rather - and there's no way of putting this sensitively - larger. You can tell that they're devoted though because they also seem to know all of the words to the songs performed by the support act, The Staves. At least, unlike one bloke here, they're not dressed up as a banana. 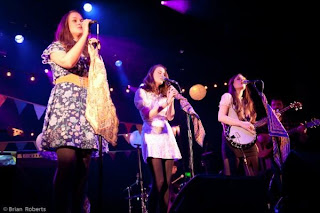 The Staves are three sisters who sing in a folk-y style, sparsely accompanied by the odd strum on an acoustic guitar. I didn't know anything about them before I saw them, and I soon learned that Jessica also performs with Mt. Desolation, but I really enjoyed their set. Yes, Jessica, who carries most of the lead vocal duties, sounds quite a lot like Laura Marling when she sings, but that's clearly more to do with singing in a folk-stylee than it is about consciously aping Marling. They are really very good. They're self-deprecating too, introducing one song by saying that they thought they'd do a version of this and then heard that the Fleet Foxes had also done a version and that they couldn't possibly be as good. Well, perhaps not, but it certainly sounded pleasant enough to me (not to damn with faint praise). A very enjoyable set and I don't imagine this will be the last I hear from them, not in a world where Mumford and Sons are so successful with the Ocado Levellers sound (as Dorian Lynskey memorably described them). 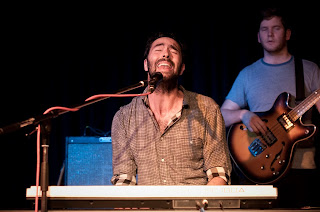 Mt Desolation, when they arrive, fill the tiny stage. It's a bit weird seeing Tim Rice-Oxley right at the front when he is more usually to be found hiding at the back on much bigger stages, but there he is. It's weirder still when, from the second song onwards, he begins to sing some lead vocals. He'd probably be the first to admit that he's not half the singer Tom Chaplain is, but he's actually not half bad, and certainly better than Jesse Quin, who's voice is okay if nothing to write home about. The plain fact is that great singing doesn't really seem to be the point of a side-project that is instead simply about the enjoyment of the music. 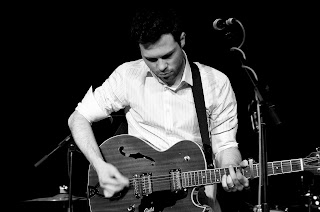 The songs mainly have a country and western feel to them, but the lyrical themes -- no matter how much they may be hidden amidst references to American geography and the classic iconography of the country song, odd in itself coming from a band largely from Sussex -- are often typically introspective and not really a million miles away from what you might hear on a Keane record. I do find it amusing to be told by a multi-millionaire (in song) that we often spend our whole lives pursuing riches and success only to find out that we had all we needed all along (what is this, "The Alchemist" by Paulo Coelho?), but on the whole it's a very pleasant hour. I couldn't tell you what a single song is called, but I can tell you that I will listen to the album with great interest when it is released in October. Self-indulgent? Well, the band do certainly seem to enjoy performing these songs with their friends, but as the audience clearly enjoy them too, what harm is there in that?

A good night and it's good to be back in the saddle.

The Evening Post review of this gig by LB can be found here.
Posted by swisslet at 22:49