If you're not interested in golf, then you might want to look away now. And with that, it's now over to Cody Bones, an old friend of this blog to talk about last weekend's Ryder Cup. We had a bet, you see... and this is one of the things that the loser has to do.

Take it away Cody. 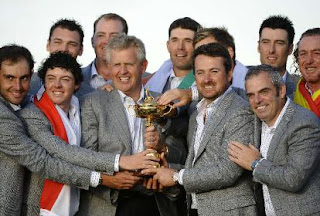 Golf... What do you think of when you hear that beautiful word. Is it Judge Smails in Caddyshack explaining that in in Scotland it's called Gaaalf, or might it be Kevin Costner, in that god awful movie Tin Cup explaining that golf is the one driving force in the universe, etc, etc. Me??? I think "When are we teeing off" "Do I have enough Cigars", and "for Christ sake I'm not riding with Don, I rode with him last time". As you can tell, I am somewhat of a golf nut, which is what brings us to the question of why in the world is some guy from Chicago guest hosting at Swisslet's place. Well, it has to do with something called the Ryder Cup. Every two years Europe and the U.S.A square off over three days of match play golf, and I don't think that there are many better sporting events out there for my dollar. Also, having a weakness for a small wager every now and then, I took it upon myself to contact ST, and a bet was quickly agreed upon. Well, I lost, the U.S. choked on Sunday and here I am writing my obligatory mea culpa. This was a great match with momentum switching back and forth from the first rain delay with the ridiculous rain suit fiasco, to the last match where the cup actually came down to Hunter Mahan vs Graeme McDowell. All I can say to ST, and the rest of Europe is "Well Played!!" Here's an offer for 2012. Sit Lee Westwood, and we will sit Phil Mickelson. Sound good???
[ST's note: swap a Ryder Cup legend for the losing-est player in US Ryder Cup history?  Dream on!]

On to the prize, ST and I wagered a hat, but this turned out to present a problem to me. I needed to find an hat that although obscure, would signify losing and Golf all in one fell swoop. Since this turned out to be impossible, I decided to split the difference, and send two hats. To signify losing, I couldn't think of a better gesture, especially being from Chicago, than to send a brand new Chicago Cubs hat. For those not acquainted with the history of the North Siders, it has been over a century since their last World Series title, trust me, it's painful. To signify Golf, I sent ST my Timberstone hat. Timberstone, nestled in the north woods of the Upper Peninsula of Michigan is one of Golf's gems, but so remote that I really only get to play there every few years or so when I trek up to my friend Mike's family place in the area for a guys weekend. So to ST, congratulations, enjoy the hats, and please remember that although the Cubs hat is new, the Timberstone hat has seen it's share of nonsense over the years, a little wash wouldn't kill it. Enjoy

Cody, you're a gentleman.  I have to disagree that the US Team choked last weekend, as the event went right down the wire to the last pairing of the last day's singles.  It's just a shame that the team's result should boil down to individual errors.... Hunter Mahan had the balls to offer to go out in that last match, and he's no more to blame for losing his match than (say) Phil Mickelson is for blowing 3 of his 4 matches, or Ricky Fowler is for dropping the wrong ball and forfeiting a hole that ultimately cost the US the half-point that would have been enough to win the match.  It's a team game, and I thought he USA -- underdogs, lest we forget -- played magnificently to take the match right down to the wire.  It's often said how much more the Europeans seem to enjoy playing team golf than the Americans, but I saw lots of signs here that this simply isn't true.  After winning their foursomes match, Bubba Watson and Jeff Overton, rookies on the US team, were asked if they had requested to play together.  Without a pause, Watson replied with a smile that, hell, he didn't even like Overton.  If they're comfortable enough to take the piss out of each other, then that's a sure sign that the team is bonding, no?  The way that players like Mickelson jumped to the defence of Mahan when he broke down into tears at a press conference after the match; the way that Jim Furyk reacted furiously when questioned about the team spirit and how much the US team cared.... these are all really promising signs for the US, and I think that the next match in Chicago in 2012 is going to be a cracker.

I've seen a lot of amazing sport live over the years, but the Ryder Cup remains special.  I wasn't at Celtic Manor last week, but I was at the K-Club in 2006 and at the Belfry in 2002, and both were brilliant.  Electrifying, even.  It's a special event, and the 2010 edition was no exception (I watched as much as I could).  I made the bet with Cody, and although he's lost and is graciously sending me a couple of hats, I'm going to send him a couple of hats too: a Ryder Cup hat (not in European blue, he'll be pleased to hear), and a cap from a sports team who play so close to my house that I can hear their crowd cheering.  I don't have to send them, but I want to send them.

Thanks for the hats, my friend.
Posted by swisslet at 21:04