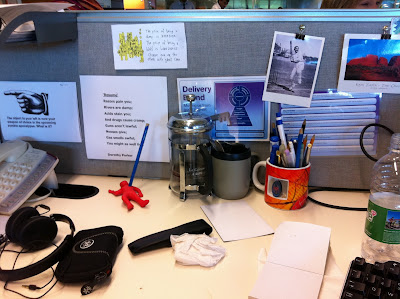 the view at my desk: click to enlarge
The other day, I was hovering around waiting for my boss to show up for a meeting, when I happened to have a closer look at the desk of the director of our department. He's only been in the job a few months, but his desk makes it clear that he means business - he's got a framed quote by Winston Chuchill and everything.

“Sure I am this day we are masters of our fate, that the task which has been set before us is not above our strength; that its pangs and toils are not beyond our endurance. As long as we have faith in our own cause and an unconquerable will to win, victory will not be denied us.”

It's a quote that resonates enough to apparently form one of the mottos of the US Navy Seal special forces unit, but obviously a quote intended to inspire a beleaguered nation during the Second World War could equally well be applied to the cut-throat world of corporate Information Systems.

Me, I choose a different sort of quotation to provide me with the motivation to struggle onwards as I sit at my desk trawling through email:

Razors pain you;
Rivers are damp;
Acids stain you;
And drugs cause cramp;
Guns aren't lawful;
Nooses give;
Gas smells awful;
You might as well live.

When I moved desk a couple of weeks ago, my new neighbours asked me what it was. It's "Résumé", a poem by Dorothy Parker, I replied. Ah, they said. When I came back to my desk a little later, one colleague wasn't quite fast enough at closing down the window on his monitor showing that he had been on wikipedia looking up Dorothy Parker.

Every day's a schoolday, right?
Posted by swisslet at 20:08