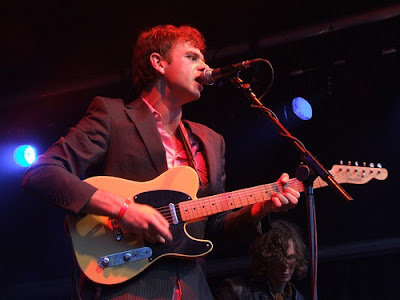 Tim & Sam’s Tim & the Sam Band With Tim & Sam? Worst. Band. Name. Ever. It’s the kind of name that screams its lack of ambition from the heights. No band with a name like that is ever going to amount to anything. Fact.

...and your opinion doesn’t change at all. I’m sure they’re very nice, but they are the perhaps the least offensive looking band I have ever seen in my life. They’ve about as much edge as a scoop of melting ice cream. They’re wearing blue matching shirts, and they look a little bit like the choir from an especially earnest Christian youth group.

....And then they start playing.

It’s vaguely folky around the edges, but the singer sounds a bit like some of the wetter end of Britpop. He’s also a bit into his gadgets. You know that appearance that KT Tunstall made on Jools Holland that made her career? She played “Black Horse and the Cherry Tree”, and in spite of being all on her lonesome with an acoustic guitar, she used a gadget to loop the track as she played it, building up the backing track as she went along, layering up the noise to a triumphant and very impressive finish. This lot have one of those gadgets too, and although they seem competent enough at using it, the music just isn’t interesting enough for me to care. They also like their instrumentals.  The overall impression is that they're amusing themselves and as an audience member who knows nothing about them at all, there’s simply nothing about them that makes me want to listen more closely. They do an damply effective cover of "DARE" by Gorillaz.  It sounds okay, but I can't help but think they've chosen it because of what it is rather than what they do with it.  At the end of the show, they rather optimistically tell us that we can buy CDs and records and things from them after the show, but I’d be amazed if anyone bothered.

Cherry Ghost are a very different proposition. With the same number of musicians in the band as their support, they seem able to produce a much fuller, richer sound. The main reason for this, of course, is singer Simon Aldred’s deep, rich voice. It sounds, if anything, even better live than it does on record, effortlessly filling the room. 2007’s “Thirst for Romance” seemed to take the band to the brink of making it: nominated as “best new group” at the Q Awards and making regular appearances on “Later...” and on radio 2. It’s a great album, probably best known for “People Help the People”, but packed with quality tracks. The follow-up, “Beneath This Burning Shoreline” was released this summer, but only scraped into the top 40 albums at number 40. By contrast, “Thirst for Romance” made it all the way up to number 7. Somewhere along the way, momentum was lost and it feels as though the band’s moment had gone. “Beneath This Burning Shoreline” is a decent enough album, but it’s just.... not as good. Where “Thirst for Romance” is filled with gentle, melancholy sounding songs with a mostly uplifting air, the follow-up is just missing something.  It doesn’t sound all that different, although the uplifting edge is gone and is replaced with a country-esque twang.  It's good, but not as good.  Perhaps it would make more sense played live.

The songs do sound good played live and Cherry Ghost are a fine live band.... but they either don’t know how to pace a set, or they don’t care what their audience thinks. As you would expect, the setlist is heavy with the new songs. What you might not expect, however, is that they only play three of their older songs at all, two of them right at the very end, and their version of “People Help the People” slows down a beautiful, hopeful song almost to a plod. I like the band and I am caught up enough in the set to pay them close attention for the first half an hour, but as the set progresses and the new, increasingly one-paced songs plod on by, I begin to get distracted by the crowd around me: the girl behind me with an increasingly poor sense of body space starting to lean on me as she chats with her boyfriend (who has a terrible, Paul Weller-alike haircut and loudly sings the first verse of “People Help the People” as the band play the intro...gah!); the drunk blokes who have shouted out their love of the new album to the band and then talked loudly all the way through the new songs they apparently loved so much; the bloke with the pink polo shirt with the collar-up who thinks he looks cool, but actually looks like Harry Hill...

It’s a shame, and it's not as though the new album isn't any good, but I think Cherry Ghost’s moment might have passed.