when the weather vane points to gloomy.... 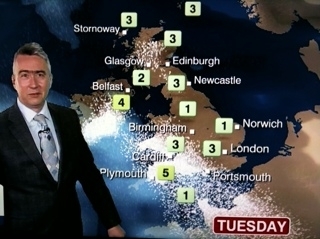 Last week, I heard the terrible news that Rob McElwee is no longer going to be presenting the weather forecast on the BBC.  It's all part of some cuts that are seeing McElwee, Phillip Avery (another favourite of mine for his almost 1940s approach to weather bulletins on the radio) and Tomasz Schafernaker move to back office roles at the Met Office.

Apparently, after 90 years of working in partnership with the Met Office, the BBC recently decided to put the contract for the weather out to tender.  The Met Office won it, but are now clearly having to make cuts in order to make any money out of the deal.  Presenters earn more money if they appear on air, and so three high profile presenters are making way.

Old school weather forecasters like Bill Giles are wondering if this is a further sign that the BBC are continuing their inexorable move away from presenting the weather seriously: using proper meteorological experts to write and deliver the forecasts and replacing them with nicer looking, younger and - crucially - cheaper presenters.

As former head of the team of weathermen at the BBC, Giles is clearly worried about this dumbing down.  He is, however, no fan of McElwee:

"While many people seem to like Rob’s quirky style, I think he is well past his best. I find his delivery irritating and condescending.  If he was to stay on air, he would certainly need training to stop him lowering his voice and petering out at the end of sentences"

Well, with respect Bill, that's a rather pompous way of looking at it.  I like Rob McElwee and I'll miss him terribly when he's gone.  He's been a familiar face on the telly since 1991, and in a world of autocue robots, his idiosyncratic presentation style is a breath of fresh air (with a chance of showers later on in the eastern counties).  This isn't just some monkey in front of a camera and an autocue, this is a guy with a sense of humour and a nice, wry delivery.  We have crappy weather in this country; it's not really much of anything.... never really wet, never really dry; rarely really hot and rarely really cold.  It changes a lot.  So we talk about it ALL THE TIME.  We can't rely on it being hot in summer or cold in winter, so localised weather forecasts are pretty important to us, and the people who deliver them to us become familiar figures:

As Joe Moran, a reader in cultural history at Liverpool John Moores University says in the Guardian:.

"I think the BBC forecasters become cult figures because they aren't trying to be personalities, and they are employed for their expertise.  It was the ordinariness of them – people like Fish and McCaskill were an antidote to celebrity culture. I also think the fact that the forecasts are unscripted is important – the personality of a forecaster, like Rob McElwee, comes through in a way that you just don't get with the glassy stare at the Autocue. It becomes more of a conversation with the viewer. I think McElwee's forecasts are little  masterpieces of concision and wry wit and complicity with the viewer."

It was bad enough that they changed the weather map to that awful scrolling around thing, but getting rid of McElwee?  In an anodyne, homogenized, autotuned world, this is truly awful news.  Apart from anything else, how can you not love someone who describes his hobby as finding enough time to have a hobby....apparently so far he has failed.  Sadly it looks like that situation might be about to change.

Be careful what you wish for, eh Rob?

Last winter was the coldest for 31 years with an average UK-wide temperature of just 1.5C (35F), down on the long-term average of 3.7C (39F).  As we slip towards November and the bleak prospect of Britain being gripped by another harsh winter comparable with those of 1939-42, surely we need all the expert forecasters and comforting asides in our forecasts that we can get?
Posted by swisslet at 19:25