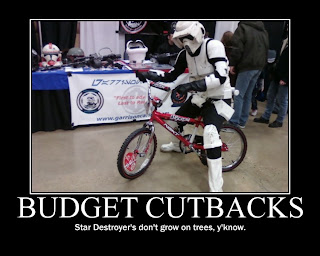 Star Wars has been a big part of my life.  I'm too young to remember it properly, but apparently I was taken to see the original film at some point in 1977 or 1978 when we were on a family holiday in Guernsey.  I do remember queuing in the rain outside the Electra Cinema in Newport Pagnell to watch the Empire Strikes Back, and I can remember distinctly counting down the days waiting for Return of the Jedi to be released.  Like most boys of my age, I collected the toys.  I've still got them, I think.  Whenever I got on my bike to nip down the road to spend the day during the holidays with my best friend, I'd always pop a bag on my shoulder with my figures in.  I've still got the Millennium Falcon and most of my figures somewhere too.  We used to have a copy of the original film on betamax tape, recorded off the telly at some point between Christmas and New Year.  I watched that tape so often that, even today, I can still tell you at what point the ad breaks kicked in.  It was one of the older cuts of the film too, the one where Luke throws the grapple and misses, and when I watch the film today, I still don't really understand why they took that scene out of subsequent versions of the film.  It wasn't to be the only time that Lucas couldn't resist tinkering with the films. 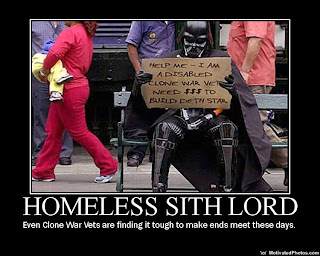 My interest waned a little as I got older, but by the time I was studying for my Masters, the original films were on their way back into the cinemas as the Special Editions, and my old VHS tapes of the trilogy were in high demand and, in the way of men who are refusing to grow up everywhere, it didn't take much for me and my friends to regress to our childhood and start collecting the action figures again.  Personally, I collected them for the fun of it, but one of my friends was absolutely convinced that lightning would strike twice and that his un-boxed figures (he bought two of each, one to play with and one to keep in pristine condition) would one day be worth a fortune.   Righto.

When the Special Editions came out on VHS, I bought the films again.  And when they came out on DVD, because I'd left my original tapes with an ex-girlfriend, I bought them again.  For the life of me, I couldn't understand why Lucas had felt the need to tinker with the films.  The tidying up of the special effects.... maybe.  But why add that pointless scene between Han and Jabba?  The replacement of the original human actor with the giant slug we knew and loved meant that the scene was fatally flawed and required distraction tactics as Harrison Ford circled the actor and had to be cut out and lifted over the tail of the now inserted CGI slug.  Also, what was the problem with Han shooting Greedo under the table?  Why change the scene so that the bounty hunter gets an unconvincing shot off first?  Has there been a better "We're not in Kansas anymore" moment than when we met Han Solo in the Cantina and see him shoot someone in cold blood under the table?  No one even bats an eyelid as he throws down his money and apologises to the barman for the mess... but not the killing.  Why change that now?  Wasn't the whole point of Han Solo that he was a bit of a scoundrel?  Why water that down now? 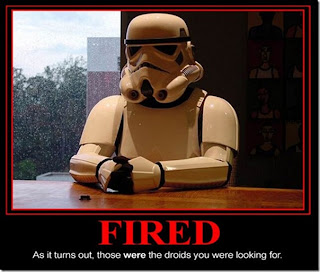 In spite of these doubts about George Lucas and his "vision", the prequels were looking like they were going to happen, so I got to get excited all over again about the films.  I can remember seeing the trailer for The Phantom Menace for the first time and marvelling at the reveal of Darth Maul's double-bladed lightsabre.  It was like I was an 8 year-old boy all over again, counting down the hours to the release of a Star Wars film.  As it happened, I went on holiday in Florida before The Phantom Menace was released in the UK, so pretty much the first thing that we did when we got off the plane was to head to a cinema to watch it.  Initially it was a thrill to watch the Jedi in the prime, using their lightsabres to cut through closed doors, but then, jetlagged and then bored by the podrace scene, I fell asleep.  The more I thought about it, the worse the disappointment became.  The acting was generally awful: Jake Lloyd was bad enough, but we knew that Ewan McGregor and Natalie Portman were capable of better.  And what the hell was Jar-Jar Binks?  And all that crap about midichlorians and virgin birth?  Ugh.  Horrible.  Two-and-a-half decades to think about it, and he came up with this?

I watched all of the prequels in the cinema, obviously, in spite of growing concerns about Lucas' judgment in casting the woeful Hayden Christensen in the pivotal role of Annakin Skywalker.  It wasn't all bad, and there was a certain satisfaction in the slow-burning political drama of how Palpatine seized power and how the Jedi fell..... but it certainly left a lot to be desired.  I can hardly watch them.

You can't argue with the box office, I suppose:

...never mind all the merchandising and DVD sales (yes, I bought them all)

Of course, George Lucas likes to claim that his vision for this cycle of films right from the very start.  Maybe he did.  Who knows?  I'm inclined to think that he didn't.  There are too many inconsistencies: why would he have hinted at the attraction between Luke and Leia if he had known that they were brother and sister when he made Star Wars?  Why would Kenobi refer to Darth Vader as "Darth" in their duel in the first film?  Surely he would have known that this was his title and not his name?  And so on, and so forth. 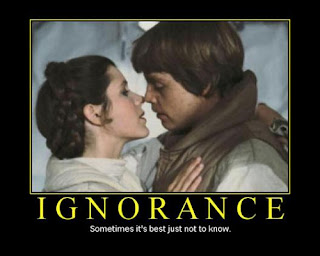 I watched a documentary at the weekend: "Star Wars: The Legacy Revealed".  Over the course of 90 minutes and interviews with academics and the likes of Newt Gingrich and Nancy Pelosi, I learned how these films draw on references as diverse as Homer's Odyssey and Illiad, Shakespeare's Hamlet and Milton's Paradise Lost.  It's about a hero's journey.  How he has issues with his father.  How he finds mentors to guide him and a quest to follow.  Blah, blah, blah.

Yes, the Star Wars films follow several archetypes of storytelling from across the ages.... but are you really telling me that Lucas was referring to all these eminent sources consciously when he was a 33 year-old film maker putting together "Star Wars" in 1977?  No, of course he wasn't.  He just wanted to make a film in the tradition of the serials he used to watch as a child.  He was more influenced by Flash Gordon than he was by Aeneas.  To claim otherwise is to be guilty of over-thinking it.

He got lucky... but there's nothing wrong with that.  Star Wars is still an amazing film and that first trilogy made an indelible impression on my childhood.  For that, I thank him.  For the rest.  Hmm.  For me, any myth there was in the story has been wiped away by what has happened subsequently.  Ah, good luck to him (especially if he gives half his fortune away to charity, as he has pledged).  One of the happiest guys I ever knew was a developer I once worked with who got a job working for ILM at Skywalker Ranch.  Talk about a dream job for a geek, huh?  Lucas brings happiness to guys like him and to kids who think Jar-Jar Binks is brilliant.  At the end of the day, what's wrong with that?

You can take this shit too seriously, right?