there's demons closing in on every side.... 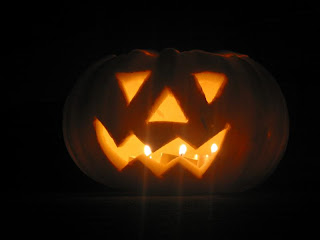 I don't do trick or treating.

I'm aware that it's popular in other parts of the world, but it is something that I don't much care for.  I'm not so stupid as to see this as a purely American thing that - like McDonalds - has slowly been absorbed by the rest of a jealously admiring world. Whatever many (although I'm sure not all) Americans might care to think, it's a tradition that's actually been around for centuries.

Oh sure, they've been doing it in the USA since at least the 1950s, but it's certainly not their own idea: it has its roots in the middle ages in the practice of "souling", where children would go door to door singing and saying prayers for the dead in return for soul cakes.  These cakes were supposed to represent a soul being freed from purgatory.  Even the idea of dressing up and going around people's houses at this time of year in the hopes of getting food or money isn't new, and has been around in Scotland as "guising" since the nineteenth century.  So it's not an originally American tradition and nor is it particularly pagan in origin, as lots of people assume (at the very most, it's a pagan festival that has long since been co-opted by Christianity)

The current Hallowe'en tradition of demanding money with menaces does appear to be a US import though.... a British custom that has now taken on a distinctly American flavour.  As recently as 1986, the House of Lords felt the need to debate the "recently imported trick-or-treat custom of demanding money on threat of playing a nasty trick, now being used by youths to obtain money from old people and others".  The BBC described it in 2007 as a "...not particularly welcome import, the Japanese knotweed of festivals".  Certainly, when I was growing up, there was pretty much no such thing over here.  I used to make a Guy for Bonfire Night, but trick or treating simply wasn't on my radar at all, for all that I loved Peanuts and obviously believed fervently in the Great Pumpkin.

I didn't want to have anything to do with trick or treating at all this year, and was fully prepared for an evening spent ignoring any knocks on the door.  C. is a more generous spirit, however, and she had taken the trouble to prepare for any callers by buying a packet of Hallowe'en themed cauldron sour sweets (with no added colours, flavours or preservatives, naturally).  Fine.  As long as it was understood that I wouldn't be opening the door to any of the little bastards.

The weather put the dampeners on most potential callers, I think, but we were paid a visit by one group of kids.

I remained glued to the sofa, but listened with increasing amusement as C. answered the door and the lead trick or treater was offered the bag of sweets.

Ah.  A muslim trick or treater.  What a beautiful, inclusive, multicultural world we live in.
Posted by swisslet at 19:41

Email ThisBlogThis!Share to TwitterShare to FacebookShare to Pinterest
Labels: history and stuff, observation