Is it just me, or is it suddenly all about zombies?

For the last year or so, you've been unable to move for vampires; whether they're the type that sparkle in the sunlight and agonise about sex before marriage, or whether they are the sort that will hump anything that moves whilst chugging back bottles of a branded blood substitute. Sure, there might have been the odd hunky werewolf hanging around the place from time to time, but when it came to the undead, basically vampires were IT.

Except now they're not.

Suddenly, you can't seem to move for zombies. Yeah, so they're not as cool and mysterious, they're not as well dressed - preferring rags to designer duds - and they tend to lurch around aimlessly with a look of confused sadness and a skin tone that is less pale and interesting and more green and decomposing.... you wouldn't exactly describe them as sexy, would you?  Not exactly something that you'd file in the "Dark Desires" section of Waterstones, are they? 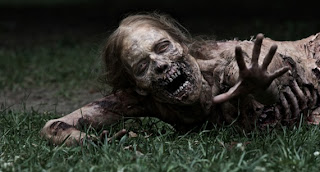 ....but zombies are suddenly everywhere you look. Zombies are pretty much as back to basics as the undead get: you don't hear much about zombie family politics, do you? Nope. Zombies wander around looking for flesh to eat. That's it. It's not big and it's not clever, but there you have it. Zombies are HOT HOT HOT.

Maybe I only think this because I've been watching the Walking Dead, the HBO serial starring Egg off of This Life, and every commercial break seems to bring another advert for a new zombie-based computer game, so zombies are somewhat on my mind. I was thinking that perhaps TV and movie executives have seen the success of all things vampire and have been looking for the next big (undead) thing. But maybe zombies aren't back in fashion at all. Perhaps they've never been away. They're not really terribly complex creatures, and I thought everyone knew about zombies, but my wife has been displaying some alarming gaps in her education as we've sat watching the telly. "Do zombies only eat living flesh?" She asked as our hero rode into a deserted Atlanta on horseback towards the end of the first episode.

"They're not going to eat that horse though, are they?"

Um.... it's either him or the hero of a major new HBO series in its very first episode, which would certainly have been a bold move.

"Oh no! Not the horse!" she cries as our hero crawls underneath a nearby tank and leaves his erstwhile trusty steed to have his guts pulled out and passed around by the feeding zombie swarm....

I think she's getting the hang of it now, although I still reckon she needs to do a bit more homework.

A new series of True Blood starts in the UK in January, and judging from the trailers, they're introducing Werewolves to the cast..... C. is very excited, of course, but how passe is that? Vampires AND Werewolves? Yawn.

Zombies. I'm telling you. It's zombies you want (although I doubt that even Eric would go there. Jason Stackhouse? You know, I actually think he would.......).
Posted by swisslet at 21:44