I was really enjoying Duncan Hamilton's biography of Harold Larwood right up until our hero set sail for Australia in 1932. It's strange that the very series that made Larwood's name (for better and for worse) is where things start to go downhill for the book, but there it is. I was gripped by the story of the making of one of the greatest fast bowlers to play the game, and how he climbed out of a Nottinghamshire mine and into the England Test side, but as soon as Larwood reached the very apex of his career, I felt Hamilton's story went off the boil. Perhaps it's because the 1932/33 Bodyline series is one of the most heavily raked over in cricket history, and perhaps Hamilton decided that if he couldn't add anything to what had already been written on the subject, perhaps he should just skip on. It's no better in covering Larwood's return to England and the aftermath of the controversy that left Larwood marginalised and embittered. I realised I was starting to struggle with the book and decided to take a break.

I heard Martin Millar mentioned by Robin Ince on Steve Lamaq's show on 6 Music last week, referring to his books as being the next step on from Nick Hornby's "Fever Pitch" and implying that they were the book of choice for someone who was serious about their music. I was intrigued, and looked him up.

The book I looked at had an introduction by Neil Gaiman, which is a pretty good start, but it seemed to be a story that was less about music and more about fairies living in New York. Well, that's not a deal-breaker for me, as I love Gaiman's books on similar themes and have a long history of reading fantasy books from the Dragonlance series (which I devoured when I was a teenager), through David Eddings, Raymond E. Feist, Terry Pratchett, Tolkien (of course) and on to Susannah Clarke's "Jonathan Strange and Mr Norrell" (which also deals with fairies). Intrigued, I researched further on Wikipedia, and discovered that Millar has also written a series of detective novels under the pseudonym "Martin Cross" and set in a distinctly Ankh-Morporkian world of elves, orcs, dragons and barbarians. On a whim, I downloaded "Thraxas", the first of the series, and the winner of the 2000 World Fantasy Award. 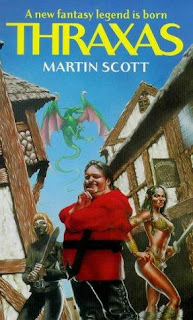 It was great, and most importantly, it got me through my Harold Larwood induced blockage, and I ripped through it in less than a day.

Our hero, Thraxas, is a drunken, overweight, middle-aged detective who finds himself caught up in all manner of political intrigues and conspiracies. It's clearly not high art, but the characters are drawn with real zest and humour and the plot just zings along. It's the first book in a series of 8 (so far), and although I moved straight onto Millar's own "The Good Fairies of New York" rather than the next Thraxas book, I imagine it may be some time before I finish that Larwood book off.

Being set in an entirely imaginary world, Thraxas doesn't feature much in the way of contemporary music references, but "The Good Fairies of New York" has so far featured plenty of references to the New York Dolls and the main characters were exiled from Fairy partly because of their desire to weave Ramones songs into their traditional folk music.  Promising.  I also see from Millar's blog that the Runaways are the favourite band of one of the characters in another of his books.  Although they're not set in a record store, there seems to be a strong musical thread in his books and I like that a lot.

As literature goes, it might not be on that Facebook Times list of 100 books you should read before you die, but then as Dan Brown's "Da Vinci Code" is included on that list, I'm not sure quite how much of a recommendation that really is....

Nevermind the setting; there's something magical about losing yourself entirely inside a book.  I'm off to do just that.

Right now. Perhaps with a cup of tea.
Posted by swisslet at 18:47