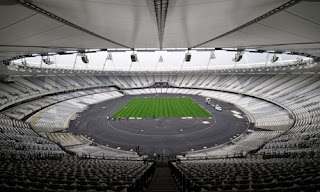 The London Olympic Stadium at Stratford
After an application window of some six weeks, the opportunity to apply for tickets to the 2012 Olympics in London closed on Tuesday night. They were supposed to close at one minute to midnight, but an entirely predictable surge in demand at the very last moment meant that they ended up accepting applications until about an hour after their original deadline. The organising committee is bullishly expecting most events to (eventually) sell out, so anyone applying for tickets does so knowing that they are likely to be entered into a ballot and hope they get lucky and get at least some of the tickets they were hoping for.

Here's the thing though: because you don't know what you are going to get when you apply, the temptation is to apply for loads of tickets and hope that you get some.... but if you get them all, then you risk being landed with a huge bill for tickets (and you have to submit your payment card details when you apply).

There's been a bit of fuss about the whole process, and I heard Martin Lewis (money saving expert man) frothing on the radio on Tuesday afternoon about what a ridiculous, unfair system this was (and he's done the same on his website too - try not to read the comments). He seemed to think that this was the worst possible way that it could be done and that it was somehow unfair.  "Anti-Consumer", apparently. 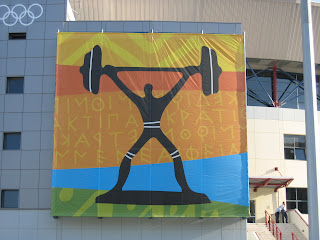 Surely the hot ticket at any Olympics?
Well, look....there are lots of things about this to get annoyed about: the fact that the only online payment method is Visa (a premium sponsor, although you can pay in cash or by cheque); the fact that we will have our accounts debited for the tickets we are lucky enough to get hold of a full month before we know what those tickets are actually for.... but I don't think that the ballot system is one of them. Martin Lewis wasn't offering up an alternative system for distributing tickets, but I hardly think that any "first come, first served" system would have been an improvement on a 6 week window that gives you plenty of time to think about what you want to apply for. Apart from anything else, this is not a new invention that we have put together just for the 2012 games. When we went to the 2004 Athens Olympics, we had to apply via a ballot then too. Can you imagine if all the tickets went onsale at 9am one morning? Every single person, whether they were trying to get tickets for the 100m final or the Women's Weightlifting, would all be on the phone or on the internet pressing f5. This isn't like Glastonbury (and crikey, that's bad enough), where everyone is essentially making the same transaction for a single event, this is whole set of events on different days and in different venues, with multiple different pricepoints. I defy anyone to come up with a way of applying for tickets to an event of this size that is as well organised and simple to use as this one. Do people really need to be reminded not to apply for more tickets than they can afford? 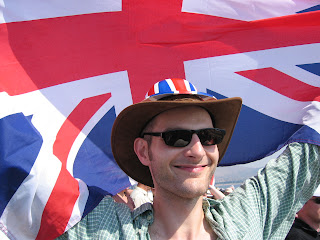 Best sporting event I have ever witnessed - watching Pinsent & the coxless 4 win gold in Athens...by about 5cm
The organisers even seem have gone out of their way to set up a way of exchanging tickets that will take eBay profiteers out of the equation: their will be an exchange site online from around January time (so long before any actual tickets are sent out to be resold for profit) that will enable tickets to be sold and exchanged for no more than their face value. I agree that there will be six months between forking out for all the tickets you have been allocated in the ballot and the ability to shift any excess, but at least you'll have a fair chance to shift the tickets you don't need and to have a chance at getting hold of other tickets you do want. You will be competing with other fans and not with people out to make a profit. Time will tell if that works or not, and the Athens games certainly had an unofficial -- but tolerated -- ticket exchange market that most certainly was for profit but enabled people to get to the events they wanted (we ended up with some Japanese Olympic Committee tickets for the velodrome, if memory serves me correctly). I'm sure the same will be true of London too, but I don't think it's fair at this stage to scream blue murder about the ticketing system.

I'm lucky: I have a group of friends who are very motivated to get to see the games, and they've spent a lot of time over the last few months pulling everyone together and working out the best possible application strategy. We've got a spreadsheet and everything, AND we had a conference call to finalise who was applying for what.... As a result of that planning, it was a cinch for me to go onto the site and to carefully pick out the tickets that I needed to apply for. In fact, the site was much easier to use than I was expecting and actually helped me to increase my chances of tickets by allowing me to put in a range of prices for the tickets I was interested in. It undeniably also helps that we're financially able to put in a big ticket application between us, knowing that it won't be disastrous if we were to get everything we apply for. Whatever we are lucky enough to get, we can be reasonably confident that we will be sitting with friends, thanks to a coordinated application.  I also won't waste my breath whining about what I don't get: it doesn't take a genius to work out that with a capacity of 4,000 and likely hundreds of thousands of applicants hoping to see some British medals, a few people are going to miss out on watching the cycling in the velodrome, to pick just one example.  If you want to watch everything, get a really big telly. 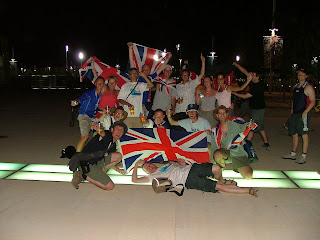 making friends in Athens 2004 after watching Kelly Holmes' 1st gold - note the random Germans at the back
With a bit of luck (and there have been three times as many applications as there are tickets available), I'll be able to spend a couple of weeks next August with my friends watching (amongst other things) some athletics, archery, rowing, sailing, tennis, horseriding, gymnastics, cycling and....yes, women's weightlifting.

I loved going to the games in Athens, and I'm looking forward to London 2012 too, whatever tickets we might end up with.....
Posted by swisslet at 19:39