I don't much like it, and I'm mildly in awe of those people who can remember which end of the platform they need to stand at to be in the right point for the exit at the station where they're getting off (I get lost in Oxford Circus all the time), but I've never been frightened.   I'm sure bad things happen on there all of the time, but I haven't seen them.

I mention this because I travelled on the Paris Metro a couple of times over the weekend: once to head across town from Gare du Nord to Gare D'Austerlitz to catch the train across to Orleans on Friday evening, and the same journey in reverse on Monday afternoon.  Nothing bad happened: we trekked across from platform to platform and waited for our trains, but on both occasions, I felt vaguely intimidated. 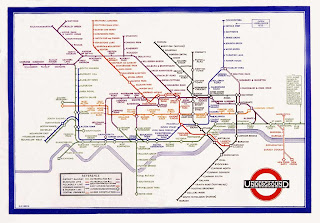 I'm not sure what it was.  It may have been the fact that I didn't really know where I was going and had completely abdicated responsibility to the journey to someone else.... but to be honest, that's true when we're in London too.

Perhaps it's the language.  I speak French, after a fashion, and I'm fairly sure I'd be able to struggle my way through enough of a conversation to get from A to B... but it is undeniably a little bit intimidating to be surrounded by people babbling away in a language that I only partially understand at a speed where I can barely make out a single word.... and yes, that's sometimes true in London too, and it doesn't bother me there.

Perhaps it's all of these things.

We might not like to admit it, but France and England are pretty close, both geographically and because of all our shared history.  A French statesman, seeking to flatter Lord Palmerston, told him, 'If I were not French, I Would wish to be English.' Palmerston apparently smugly replied, 'If I wasn't English, I would wish to be English.' (illustrating, at a stroke, why all French people might be well justified in hating us all....) In spite of this closeness though, it can feel pretty alien... at least it certainly does to me on the Paris Metro.  People even look different: both ethnically and physically.  London is a melting pot, of course, and even if you discount the tourists, the history of Britain has been defined by successive waves of immigrants.  So has the history of France, but the immigrants have often come from different countries.  Many people travelled to Britain after the Second World War from the Caribbean or the sub-continent or from East Africa.  Many people moved to France, at the same time or perhaps a little later on, from West Africa and North Africa.  The ethnic mix is superficially similar, but the immigrants in France look very different and have different coloured skin, different clothing and different languages.  To my eyes, it seems more unfamiliar to see someone with very dark skin wearing African traditional costume than it is to see someone with slightly lighter skin wearing a sari.  I don't have a problem with either, but the one is a much more familiar sight to me than the other and I suppose that as a result I'm more comfortable with it.

Never mind skin colour or traditional clothing, even people in more traditional "western" clothes look different to me.  It was hot in Paris over the weekend and people were wearing shorts and t-shirts.... but in England where people might be wearing baggy, shapeless shorts with cargo pockets with an un-tucked t-shirt, the French seem to like wearing straight line, chino-style shorts with tucked in shirts or polo shirts.  Not so very different, but different enough that you notice.  Ladies too seem to dress slightly more formally and wear slightly dressier outfits to work.  The cliche would say that the French are more elegant than their English equivalents; perhaps thinner and more expensively dressed.  Maybe, like many generalisations there's a little truth in that, or maybe they're just the ones that caught my eye, but people just look different somehow.  Same same, but different, as they would say in Vietnam, with a shrug of the shoulders.

I don't know why all of this might come together to make me feel slightly intimidated as I stood on the platform in Gare Du Nord waiting for the RER train to come along and take me to the airport, but it did.  I felt alien and out of place.

What I am sure of is that it definitely says more about me than it does about anyone else.  I'm not saying that different is not bad, it's just.... different.
Posted by swisslet at 22:20