What you share with the world is what it keeps of you.... 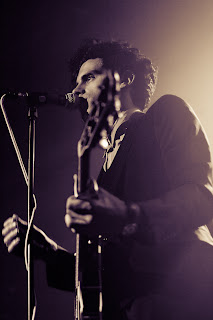 Let’s get this out of the way right at the start: there are few things more annoying in life than people who spend good money on gigs to stand there talking all night. They have to talk loudly, of course, because otherwise they can barely hear each other speak over the music. The Rescue Rooms can be a cracking little venue if you’re standing in the right place, but last night’s gig was sold out, and we found ourselves standing quite near to the doors at the back. There was a little clutch of people standing on the ledge near us who spent literally the whole set laughing and chatting. The hate rays sent out by the people around them meant that they knew they were irritating people, but apart from making sarcastic “shhhh-ing” noises at each other, it had no impact. Bizarrely, given their lack of attention to the band, they actually seemed to know most of the lyrics to the songs being played, but were determined that the band should be no more than a backdrop for their conversation. Perhaps even more annoying were the people who pushed their way out of the crowd before the encore to stand just outside the main doors. The idea, presumably, was to be able to watch the encore but to be able to make a speedy getaway. Quite why they had to stand there chatting loudly to each other as the band came back on and started to play, I don’t really know. Noah and the Whale seem to attract a fairly quiet and undemonstrative crowd at the best of times, and lots of their songs are quite downbeat. Somehow this just seemed to make the background chatter all the more evident.

The Noah and the Whale gig that we saw at the Bowery Ballroom in New York in March this year was one of the highlights of my trip. It was great to get out to one of New York’s iconic venues, but it was also good to be able to watch the band performing songs from an album that was already fast becoming favourite. I loved “The First Days of Spring”, but the songs dwell on heartbreak and, although good, are not exactly uplifting. By contrast, the songs on “Last Night on Earth” are significantly more upbeat without reaching quite the levels of twee that can be found on the band’s debut (which, in spite of that, is still pretty good). Fink’s songwriting has improved though, even if he has clearly been listening to a lot of Bruce Springsteen, Lou Reed, Tom Petty and – I think – Deacon Blue. He doesn’t have the best of singing voices, and tonight – as C. pointed out to me – he seems to slide into every song, reaching for the right note, but the songs themselves are good. Where the last album was very much about personal heartbreak, this one seems to be full of stories, with each song seemingly telling a different story. L.I.F.E.G.O.E.S.O.N. is a good example, telling us about Lisa and about Joey, linking their apparently unrelated stories together with a gloriously uplifting middle section about facing up to the end of a life well-lived. It’s probably my favourite song so far this year, and there’s something about that middle bit that raises the hairs on the back of my neck.

I bought the new album at the same time as I picked up Elbow’s “Build a Rocket Boys”. I *like* the Elbow album, but I must have listened to “Last Night on Earth” at least ten times as often and, with nearly half the year gone, it’s looking like a pretty strong contender for my album of 2011. Live, the band are good: they reproduce their songs accurately enough, but I do find them a tiny little bit bloodless: going about their business without much movement and without much interaction with the crowd (Fink apart, who tells us that he played one of his first ever professional gigs in Nottingham, earning £50 for a £30 outlay on the ticket north, and at least makes a bit of an effort to engage). Their songs probably don’t help: they play a quite different set – at least in terms of the order of the songs played – to the one they played in New York, but they still have the same fundamental problem: a significant chunk of their material is quite significantly downbeat. Whichever way they cut it, it seems hard to pick up much momentum with the crowd. The result is compromise: they don’t seem to commit as fully as they might to the slower songs, perhaps conscious of the chatter in the crowd, but the bouncier songs still contrast a little too strongly, especially when they are grouped together towards the end of the set. “5 Years Time” and “The First Days of Spring” are both excellent songs, but played together (even with “Tonight’s the Kind of Night” in the middle), the change in pace and atmosphere is quite abrupt. The one is tailormade to be played in the sunshine at a festival, but the other is the kind of song to be played in the evening, alone with a bottle of wine. It’s quite a jump in mood.

Still, even when standing right at the back, annoyed by some of the crowd and wondering about the pacing of their set, they’re a band I very much enjoy watching. I’m listening to the album again today, and I wouldn’t be at all surprised if I find myself watching them for the third time in as many months at Glastonbury in June.

Intro (Paradise Stars)
Give A Little Love
Just Me Before We Met
Blue Skies
Give It All Back
Love of an Orchestra
Life Is Life
Jocasta
The Line
My Door Is Always Open
Wild Thing
Rocks and Daggers
Waiting For My Chance To Come
Shape of my Heart
5 Years Time
Tonight's The Kind Of Night
The First Days of Spring
Encore:
Old Joy
L.I.F.E.G.O.E.S.O.N.

(the setlist at the Bowery, for comparison, was Blue Skies, Tonight’s the Kind of Night, Give a Little Love, Give it All Back, Love of an Orchestra, Life is Life, Just Me Before We Met, The Line, I Have Nothing, My Door is Always Open, Wild Thing, Rocks and Daggers, Shape of My Heart, Waiting for My Chance to Come, First Days of Spring, Encore: Old Joy, L.I.F.E.G.O.E.S.O.N., Five Years Time)

Mike's review of this gig for the Evening Post is here.
Posted by swisslet at 19:22