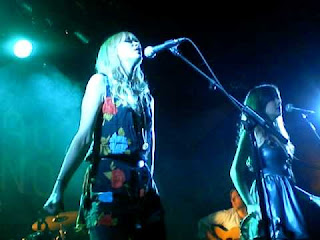 Look, here’s the thing: when I write gig reviews on here, I generally have the luxury of being able to write about what the hell I want. If I’m not that bothered about the band and manage to find myself distracted by the haircut of the bloke standing next to me, then I can talk about that. I always attend concerts knowing that I’m going to be writing them up, and this forces me to actually process what I think of the show and not just let it wash over me. I think that’s a good thing, but for all that I write these reviews, I’m not really writing them for anyone but myself. I don’t have wordcount restrictions – as you might have noticed – and I don’t have any deadlines but the ones that I impose upon myself.

At yesterday’s gig, this changed. For the first time I was officially attending the show as “a reviewer”, with a deadline and a wordcount and EVERYTHING. I was going to the gig anyway, so sadly I didn’t get to take the reviewer’s ticket, but as that meant that LB was going to be able to attend gratis, then that was okay too. With a review for Leftlion to write, I felt a heavy responsibility, I can tell you. I took a notepad and pen to make notes, lest I forget a detail that might prove crucial in my 250-400 word review. I even arrived at the venue early enough to be able to catch BOTH support acts to mention them in my review.

Anyway. Here’s what I came up with. It might get cut to pieces or it might not appear at all, but here’s what I submitted:

As sisters, Catherine and Allison Pierce have likely been performing together for as long as they can remember, but as The Pierces, they’ve been releasing records since as long ago as 2000. Only now, after four albums, do things seem to really be taking off for them. Critical acclaim (and a song – “Secret” - featured on hit US TV shows “Dexter” and “Gossip Girls”) never really converted into commercial success, and the band seemed on the verge of calling it quits before fate intervened in the unlikely shape of Coldplay bassist, Guy Berryman and an offer to produce their next album. The result, “You & I” sits at number four in the UK Albums chart – the first of their albums to make the chart in the UK - and singles “You’ll Be Mine” and “Glorious” feature heavily on national radio playlists.

Tonight’s gig is the second in a short tour that culminates with an appearance at the Glastonbury Festival. Support comes from Delta Girl, whose accent marks her out as more Mersey than Mississippi delta, but whose music comes squarely from the tradition of the delta bluesmen and from the leather-shorted, guitar-wielding Alice Gold. Both acts have been marked out in the press as “ones to watch” and are warmly received by a decent-sized crowd, politely massing for the headline act.

The Pierces play a relatively short set tonight, clocking in at less than an hour, and focus almost exclusively on songs from their new album. Luckily, the material is uniformly good and the sisters’ soaring harmonies sound as good live as they do on record. Their earlier albums are folkier, but the sisters seem to have been listening to Stevie Nicks-era Fleetwood Mac and the Mamas & Papas, and their influence is written large across the new songs. Highlights include “You’ll Be Mine” (requested on Radio 2 as “the 1-2-3 song”, apparently), “It Will Not Be Forgotten”, “Close My Eyes”, “Kissing You Goodbye”, an acid-tinged “Secret”, “Sticks and Stones” and a wistful “I Put Your Records On”.

It’s not often that a crowd shout of “Boring” will be taken as a compliment, but the band finishes their set with a storming version of their epic 2007 paean to ennui. It’s a great way to finish a set by a band whose star is (finally) on the rise.

As I worked my way to join my honourable colleague, the reviewer for the Evening Post, at the front before the main act took to the stage, I felt the force of a few hate lasers burning into the back of my head. I waved my notepad seriously and told them “I’m REVIEWING the gig” and pushed on serenely. The full extent of the notes I took in that notepad? “Delta Maid: Mersey delta” and “Alice Gold: leather shorts”. Both, you’ll notice, observations that were included in the final submission…. Not a peep about the headliners, mind.

In case it doesn’t come across in the Leftlion review, I very much enjoyed the show. I don’t really understand why a Scouser chooses to sing so faithfully in the idiom of the American South without adding her own take, and Alice Gold were pleasingly noisy but otherwise – shorts aside – I didn’t listen closely enough to take much in (although maybe I’ll give them another go at Glasonbury). The Pierces though, I thought were great. It’s a good album, and the more I listen to it, the less I hear the Fleetwood Mac influences that seemed so obvious when I first played it. Oddly enough, I bought this album at about the same time as I bought Danger Mouse’s “Rome”, his tribute to the spaghetti western soundtracks of Ennio Morricone. When I was running the other day, I had both albums playing on a playlist that was accidentally set on shuffle, and some of the songs on “You & I” sit strangely comfortably alongside some of the Norah Jones voiced songs on the Danger Mouse album.

The crowd was a bit Radio Two: slightly older and keen to be inside the venue from the moment doors opened at 19:30, but the place was full without being rammed and there was a decent atmosphere. Apparently the Pierces are a little coy about revealing their ages, which as they released their first record in 2000 is perhaps understandable: I’ve barely read a review of them as it is that doesn’t mention either the way they look or the fact that Catherine was engaged to Albert Hammond Jr from the The Strokes (both things I avoided in the Leftlion review but have obviously now drawn attention to. D’oh). Regardless of how they look or who they are sleeping with, the most important thing, of course, is the music…. And they sounded great. At least as good in person as they are on record, with the added bonus of watching the sisters exchange (deliberately) pointed looks during “Secret” (“…two can keep a secret if one of them is dead”). A good show, then. Success has been a long time coming, but I for one am planning to troop up the hill to the Park Stage on Sunday at Glastonbury to watch them again. You can’t say fairer than that, eh?

Mike’s review for the Evening Post is here.
David Baird's great photos from the gig are here.
Link to the (entirely uncut) article on Leftlion here.  Front page link!
Posted by swisslet at 20:06