After reading about 4,000 pages of George R.R. Martin’s “A Song of Fire & Ice” saga in very quick succession, through April and May, I took something of a break from reading through June. It wasn’t really something that I’d planned, but with “A Dance With Dragons” - another 1000 page epic and book 5 in the series - due to come out in early July, I just didn’t have the energy to get started on something else.

I was probably keeping my powder dry as I really wanted to know what happened next…. Those books are popular for a reason….Most of the way through the saga, each chapter in the book has been told from the perspective of an individual character, with many of the same characters appearing in book after book. The format changed a little in Book 4, “A Feast for Crows”, with Martin deciding that he would only tell us the story from the perspective of half of the characters. Book 5, we were assured, would pick up the story by taking us back over the same chronology from the perspective of the missing characters. Finishing book 4, not surprisingly, leaves you hungry to find out what’s happened to everyone else… and as luck would have it, I was only going to have to wait a month to find out (in George Martin’s endnote to book 4, he tells his readers that he’s hoping to have book 5 published before the end of 2005, so I think it’s fair to say that some people have been waiting a little longer than me to find out what happens next…)

The night before “A Dance with Dragons” was released, I charged my kindle up and put in a pre-order. When I woke up the next morning, the book was there and ready to go. I love my kindle. Since then, and with only a brief pause to read a few comics I picked up at the weekend, I’ve mostly been spending my evenings curled up in my chair with some music on and reading my book, often with rain pattering down on the window outside.

Is there a better way to unwind than that?

The good/bad news (depending upon your point of view) is that there is definitely going to be a book 6 in the saga, and there may be a book 7. I don’t know if you’ve seen George R.R. Martin, but the books have been getting longer and longer, he doesn’t look to be in peak physical condition to me, and he’s no spring chicken. 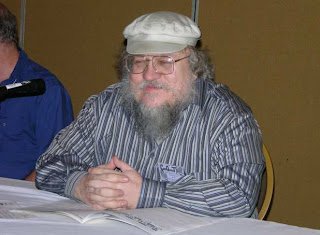 Plot threads that this old coot laid in the very first chapter of the first book in the series have not yet been resolved, so he’d better not bloody die on me leaving this open-ended. You hear me George Martin? No dying. When you’re not writing, you should be eating well, exercising and getting enough sleep.

You will finish this, damn you!
Posted by swisslet at 18:34