Well, although there is inevitably something of a Glastonbury theme about this week's earworms, how about we kick off with something a little random?  It's a classic, obviously... but it's not really the whole song that has got stuck in my head as much as that big parping intro.  Over and over again.  As usual, I have absolutely no idea where it's come from.  What can you do but roll with it?

A band so good that I saw them twice at Glastonbury this year: first on the Park Stage on Friday and then in the John Peel tent on Saturday.  I think they were probably a little better at the Park, but they were excellent both times.  I like the albums, but this is very much one of those bands where it all really started to make sense when I saw them playing live.  They're not much into onstage banter, but they sounded really, really good.  The bassist is kinda cool too.

Well, I was a little disappointed by his set, truth be told.  He's a solid gold legend, of course, and he has the right to play exactly what he wants, but after a strong start I felt that his set sagged badly in the middle and the huge crowd began to lose their focus.  If he'd paced it so that he'd had a couple more of his best known songs in there, then things might have been totally different.... but as things were, he followed his own muse and we began slip sliding away.  Then he played this.  TUNE.  His bassist has been in his band for twenty-odd years, and of course this is his big moment.  He did not disappoint, and in fact played that famous bass solo twice.  It's a great song, isn't it?  Have you listened to the lyrics recently?

"He looks around, around
He sees angels in the architecture
Spinning in infinity
He says Amen and Hallelujah!"

Need a reminder of why Paul Simon is a genius?  This song is it.  Oh, and Chevy Chase is in the video.

There was a time when I thought I would never get to see Morrissey performing live: I'd turned down a chance to see him on the "Your Arsenal" tour, and then he didn't tour again for nearly a decade (if memory serves me correctly).  Now I try and see him whenever he comes around.  His solo albums have (as ever) been of fluctuating quality, but it's hard to escape the thought that this is a unique voice in English music and one that we will sorely miss when he is finally gone.  He's long since embraced his back catalogue, and Smiths songs are a common feature of his setlist.  At Glastonbury his very first song was "I Want The One I Can't Have", but he also played "There Is A Light", "Shoplifters of the World Unite", "Meat is Murder" and "This Charming Man".  Sure, Jesse Tobias has little of the subtlety of Johnny Marr, but these are still fantastic songs.  Perhaps not surprisingly though, Morrissey's band seem more comfortable playing his solo songs, and their muscular, slightly lumpen style fits this particular song beautifully.  As ever, love those lyrics.  How many other songs can you name that denounce the compromise of the English Parliamentary monarchy?

GJ is something of a one man earworm crusade: as we sit at our desks at work, he's quite often passing over an iPhone and a pair of headphones to play me something.  I shouldn't complain really, as he's the reason that I gave Plan B a go in the first place, and it's always good to hear something new.  He's about as subtle as a sledgehammer though: he knows that today is earworm day, and so he played me this and made me watch the video.  As the song is on the list, then his campaign clearly worked, but what's wrong with sitting there humming something until it shifts into my subconscious and I pick up the tune without realising what's going on?  Eh?  Tell me that.  This is a great tune though, and has a marvellous video that I encourage you to watch.  I skipped Plan B at Glastonbury in favour of Eels - who were excellent.  My rationale was quite simple: I reckon I'm more likely to have another chance to watch Plan B than I am Eels.  Of course, I would have liked to have seen them both, but that's not how Glastonbury works, is it?  It's all about choices....

Mark "E" Everett is something of a funny fish.  He's clearly had a rather turbulent life and has experienced a lot of loss and pain that is reflected very honestly in his music.  I've never seen him play live before and didn't really know what to expect.  He was great.  He's still sporting a very impressive beard, as is every single other member of his band.  He also seemed to be in an excellent mood and really enjoyed himself... which I definitely wasn't expecting.  I love this song, and somehow the fact that he played it in a thrash style made it all the better as the sun set.  He loves...... burds.

That link, live or pre-recorded, to the International Space Station was pretty cool: astronaut, Mark E. Kelly reciting a line from "Space Oddity" to his wife (Gabby Giffords, who is - of course - recovering after being shot in the head earlier this year) and then reading one of the verses to the song itself.  But the line that had me in tears was much simpler: It's a beautiful day.  Don't let it get away.   I've been telling people all week that I thought U2 were pretty good but lacked that emotional connection with the crowd that Blur got in 2009... but as they moved me to tears, they must have been doing something right, eh? (that World MS Day video is here, by the way).

Emotional connection to the crowd?  Yeah.  That.  More tears.

I only watched the last 3 or 4 songs of their set as I had made my way over to watch Morrissey.  They had a really big crowd and, by that stage, the singer was all beard and sweat and bare chest.  I don't really know any of their stuff, but when they played this it was EPIC.  Respect.

OK, so two weeks ago I had never heard of this.  Then I discovered it when trying to show my 4 year old niece what a badger looked like on YouTube, then I found out that it was "a thing", and then I saw a flag with a badger, a mushroom and a snake at Glastonbury.  It's not big and it's not clever, but it most certainly IS a weapons grade earworm.  Sorry GJ, but you haven't heard the last of this one yet. 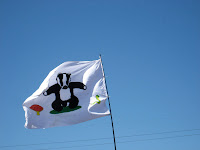