We ended up having a conversation at work this afternoon about the films that I haven't seen.  This is old ground for me: there are certain films that I have never watched that seem to cause widespread amazement and whenever this comes up, people seem to want to spend time pushing me to find out why not.  Dirty Dancing, ET, Grease, Bambi, Close Encounters of the Third Kind, Ghost, Aladdin.... there seem to be loads of them.

So why haven't I watched them?  Well, the most popular opinion amongst my colleagues today was snobbery: I simply refuse to watch them out of some highbrow view of what kind of film is worthy of my attention and what is not.  Simply not true, I'm afraid.  I've seen Grease 2 starring Michelle Pfeiffer and Maxwell Caulfield, so what kind of high ground am I ascending, exactly, by bragging that I haven't seen the original Grease?  I haven't avoided any of these films on principle, I just haven't seen them.

Apparently that's hard to believe and harder to comprehend.

Anyway.  As part of my defence this afternoon, I mentioned one of the films that I have seen.  You know what it's like: you're watching TV at stupid o'clock and you should really be getting to bed.  As you're idly flicking through the channels, a late night movie is just starting, so you sit up and watch the first five minutes.... it's a made for TV movie, so you don't imagine this will be detaining you long, and then before you know it, it's gone 3am and you've seen the whole damn thing.  I have vivid memories when I was a teenager of staying up to watch something my memory tells me was called "The Ron de Flores Story", a film about an ex-con who was discovered in jail to be an amazing baseball player and eventually becomes a professional player.  It wasn't epically crap in a "mega shark vs giant octopus" kind of a way, but for some reason it has stuck in my head as being a symbol of all those hours you've spent watching crappy films that you will never get back.

I mentioned this to my colleagues, together with the aside that I've never been able to find a trace of the film whenever I've looked for it online.  It's as if it never existed and I've just made it up, or I actually fell asleep in front of the telly and dreamed the whole thing.  It's a really vivid memory, but the only result that google brings up is me when I've mentioned the film on this blog in passing.

Perhaps it doesn't exist, said one of my colleagues.

Hmm.  Now I was starting to worry a little for my own sanity and decided to change my search strategy: instead of searching by name, I decided to search for mentions of a film about an ex-con who becomes a professional ball player or, indeed, the player himself if this was actually based on a true story.

Much to my relief, I quickly found out that the film does actually exist - One in a Million: The Ron LeFlore Story. DeFlore is real, a centre fielder, mostly for the Detroit Tigers who played in the 70s and 80s, even making the All Star selection in 1976.  He also served a sentence of 5-15 years for armed robbery before playing baseball at all, and played his first ever game whilst inside.  He was ultimately talent spotted and played his try out for the Tigers whilst on day parole from prison.  It's a remarkable story.

Brilliantly, the film starred a certain LeVar Burton, better known to most as Geordi La Forge from Star Trek: The Next Generation. 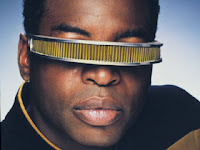 I'm not sure why, but this fact makes me very happy.
Look, there's a clip on YouTube and everything.

The film is rated as a 6.2 out of 10 on IMDB from 84 votes.  Not too bad.  That clip is nearly 9 minutes long and shows Ron having his trial with the Tigers.  I watched it all.  I'd happily watch that film again and waste another couple of hours of my life.

The net result of all this excitement?  Tomorrow, one of my colleagues is bringing me in her copy of Aladdin to watch on DVD.  She was also going to bring me Beauty and the Beast, but I pointed out that as a 37 year old man, I wasn't sure I wanted to watch a film featuring a singing dinner set.

Who says the time you spend in the office is wasted?
Posted by swisslet at 20:05