my blood runs cold, my memory has just been sold....

I sat down around a table for a meeting this afternoon and was a touch startled to look up and find myself facing this: 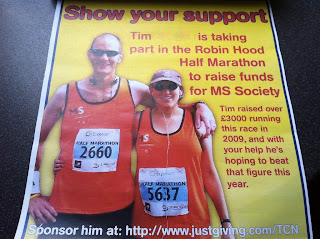 Now, they did say that they were going to be making a poster, but somehow I hadn't been expecting this lurid yellow and orange number, nor the sheer size of the picture of my ugly mug beaming back at me.

Mind you, I wasn't half so startled as my wife was when she saw it.

I tried telling her that it was nothing to do with me and that the whole thing had been taken out of my hands.... but then she asked me where they got that photo from, and frankly I had no answer.

....because I sent them the photo.

I've threatened to send the poster to the people who use any excuse to have a picture of her in their corporate newsletters, and the sheer horror of that thought seemed to quieten down the immediate need for a witch-hunt.  I think she's still too shocked for further repercussions just now.  I'm sure that will change soon enough.

Thanks to everyone who has sponsored the three of us so far (LB isn't pictured above - lucky him - but he's very much taking part and has been training hard for the big day which is now only a couple of weeks away).  We've raised over £700 now, and that total will swell to £1,200 when I take advantage of a fund-matching scheme in my office that will match the first £500 of any money we raise.  We're aiming to get up to £1500, so there's still some way to go.

You can still sponsor us here.  Every penny is much appreciated and will be going to a great charity.