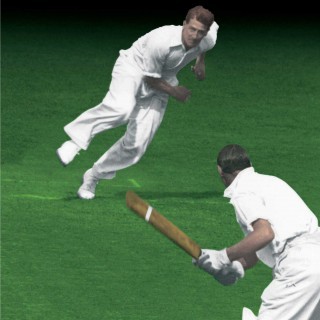 I have a very clear memory of sitting in the front room of my grandparent's flat above the Hoe in Plymouth around 1985 watching the tv dramatisation of the 1932/33 Bodyline Ashes series.  I would have been about 11 at the time, and I wasn't yet immersed in cricket, but there was something gripping about the drama of the story that it told; a story of a ruthless, aristocratic captain (played by a very young Hugo Weaving) and his determination to neutralise the threat of Australia's hero, Don Bradman, to bring the Ashes back to England.  His weapon of choice, of course, was Bodyline: short, fast bowling aimed outside the legstump at the batsman's body to a packed leg-side field.

I now live in Nottingham, of course, within cheering distance of the Trent Bridge cricket ground. Close enough, certainly, that it's only a short walk to go for a drink in the Larwood and Voce... a pub that was named after two of the guns that fired Douglas Jardine's bullets in that most famous of all cricketing series: Harold Larwood and Bill Voce.  Two of Nottinghamshire's finest... from a time when all of the best fast bowlers seemed to be miners, whistled up from the pit.

Since watching that mini-series, my interest in cricket has grown and I'm now happy to watch pretty much any test match, but my fascination with this series in particular has stayed with me.   I have read an authoritative book on that series ("Bodyline Autopsy" by David Frith) and also a wonderful biography of Harold Larwood by Duncan Hamilton.  I know quite a lot about more a few games of cricket that happened nearly eighty years ago than is probably healthy.

...so obviously when I saw that there was a dramatisation of the Bodyline Ashes series being staged at the Playhouse, I was hardly likely to give it a miss, was I?

Written by Michael Pinchbeck, the play doesn't manage to tell me anything that I didn't already know, but it tells the story of that gripping series mainly from the point of view of Harold Larwood.  Larwood was a magnificent bowler; he was unusually short for a fast bowler, but astonishingly quick.  Archive footage of his action was played in slow-motion during the play, and it was truly a thing of beauty.  Good batsmen, Bradman included, could hardly back away from the stumps fast enough.  Larwood gave his all in the 1932/33 Ashes series, putting his body on the line for his country and his captain, and he hurt himself so badly by the end of the series, wringing blood out of his socks at the end of every session, that he was never quite the same bowler again.  England won the Ashes, but the fallout cost Larwood his England career: he was asked to apologise and refused as he didn't believe he had anything to apologise for.  Ironically, Larwood emigrated to Australia, where he died in 1995.

The play is simply staged: the entire cast of seven are mostly on the stage for the duration, swapping roles as required; the set itself is virtually bare, featuring only a few simple chairs.  The cricket itself is shown in the form of archive footage watched by Larwood's wife at a Mansfield picture house.  It works beautifully.  Jamie De Courcey is fantastic as Douglas Jardine - the architect of Bodyline and another of its victims: he was asked to win the series, but was then criticised and alienated for the manner of that hard-earned victory).   Karl Haynes is very good as Larwood, but once I'd seen the footage of Larwood himself bowling, following that was going to be an almost impossible task.  Paul Trussell was also excellent as Frank Foster, Arthur Carr and Bill Woodfull, and Damien Warren-Smith was also very good as Jack Fingleton, our narrator.  Hell, it was a good cast all round... it seems pretty harsh not to also mention Robin Bowerman, Daniel Hoffman-Gill as an uncanny Bill Voce and Sarah Churm.  They portrayed the gap between the Gentlemen (Jardine, Warner, Carr, Allen) and the Players (Larwood, Voce), and the English and the Empire beautifully.  I especially loved the table-top demonstration of the legside field using pints of mild, a tub of mustard (Bradman) and wine glasses.  Nicely done.

Once or twice, it seemed to me, the script confused Bill Voce and Bill Bowes, but I very much enjoyed it nonetheless.  Lots of reviews seem to have focused on how it's not really about cricket at all but is instead all about the human drama.  Well, yes... it is about the human drama, but to say that it isn't about the cricket is a lie as the whole drama is centered on the tests and the fallout from the tests. C. quite enjoyed it, I think, but I think she struggled in the second half was the series unfolded.  I thought it was excellent: well staged, well acted and telling a compelling story.

You've missed your chance to see it in Nottingham now as the run is about to end, but it's almost certain to extend its run somewhere else.  They've been asked by the MCC to put on a performance at Lords... probably the first time in nearly 80 years that they've seen Larwood bowling there.

Best line?  When it's put to Jardine that the Australians seemed to have taken a dislike to him, he spits "It's fucking mutual".  Nice.

There's nothing new here, but it's one of the great stories and still causes arguments today.  Me, I think they played within the rules, and all this talk of the 'spirit of the game' was as disingenuous then as it is now....

Recommended.
Posted by swisslet at 22:07