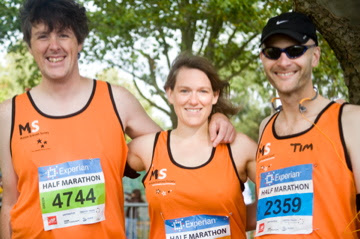 Well, that's that done then.

My official time was 1 hour 56 minutes and 22 seconds. That's exactly 30 seconds faster than I ran this race 2 years ago.  I'm pleased at any improvement, and a one second improvement would probably have been enough, but I can't help but feel slightly disappointed.  I ran the 13.1 miles at an overall average pace of 8m51s per mile, but I had hoped I might be able to manage an average of 8m45s (thus knocking another minute or so off my time).

It's not the end of the world, by any means, and conditions were probably more difficult than they were in 2009 (it was quite windy).... but at 10 miles I was ahead of my overall 2009 time by a good 2 or 3 minutes, and in the last few miles - probably the last mile, really - I let all of that slip bar that 30 seconds.  I can't help but feel it's a whole lot of effort to go through for 30 seconds.

To be honest, I should be pleased with what I did achieve.  I tweaked a muscle around my backside/top of my thigh on my last training run on Thursday, and spent all of the weekend desperately applying tiger balm and stretching it off, hoping it would ease up.  In the end, I ran with a heat pad stuck on.  It didn't hinder me all that much, I don't think, but I could feel it tightening up after about 4 miles and it certainly didn't help.  Maybe that's a minute, right there.  Who knows?

To be honest, I know I ran the race quicker overall, but this felt like much more of a slog much more quickly than it did 2 years ago.  In 2009, I experienced a bit of a rollercoaster of emotion, alternating between feeling great and feeling terrible, culminating with a tricky last couple of miles.  This time around, although the hills didn't seem to hit me as hard (with less hill training!), the whole thing felt more of a grind from about 3 miles on.  I don't think my splits show a dramatic slowdown (apart from labouring up the hill in the University park at mile 6, a wobble on the hill in Wollaton Park at mile 8 and then the final slog up the embankment to the finish line when my legs had pretty much stopped responding properly at all and I was stumbling along trying not to fall over).  It just felt harder.  Maybe it was the wind, although I was quite focused on ticking the miles off as they came and wasn't really paying much attention to anything else.  Apparently, when I finished I looked like I was travelling at a reasonable speed but looked drawn and deathly pale.  Sounds about right.  I felt pretty drawn and deathly pale too..... 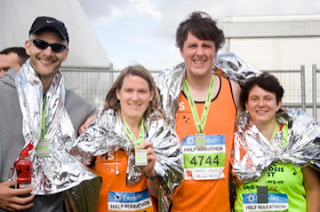 Still, mustn't grumble.  The important thing was that we all got round in one piece (C. knocked 4 minutes off her time from 2009, coming in at 2:14:25, and LB smashed his 2009 time by a full 15 minutes to record a personal best for this race with 2:03:54.... not quite the sub-2 hour time he was hoping for, but a bloody good effort on a difficult, bumpy course in quite windy conditions.  Abi, pictured to the right above, did brilliantly too for the Cystic Fibrosis Trust and clocked a time of 2:06:50).  WELL DONE TEAM!

Best of all -- and in no small part to contributions from people like YOU -- we have so far raised £2,786 for the MS Society, with a further £510.50 to be added in Gift Aid.  That's well over £3,000.  A brilliant effort and I'm so pleased and grateful for everyone's generosity.

I was very tired yesterday afternoon and I'm very sore today, but it all feels worthwhile for that if for no other reason.  Mind you, when I was asked if I was going to be running this race again next year, I could only reply that it was FAR TOO SOON for me to be thinking about that just now.

Give me a chance to get over this one first, eh?
Posted by swisslet at 19:32