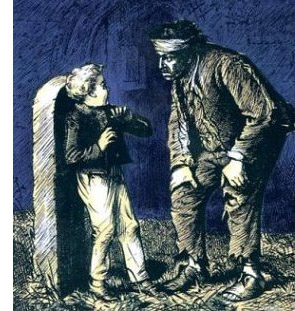 I've been reading "Great Expectations" by Charles Dickens.  I tried reading "Our Mutual Friend" when I was a student, but it didn't take.... but I read "Little Dorritt" when we were travelling last year and I've been hooked since then, determined to work my way through the great man's oeuvre.  It's not rocket science, is it?  When you read a book like "David Copperfield", you're not exactly taking a punt into the unknown, are you?  It's hardly a risk to pick up a book widely acclaimed as one of the greats.

I've always liked to read, as long as I can remember, but it took me a while to get over the fear of the classic that was pounded into me at school.  Who here isn't suspicious those distinctive cream and black covers that often surround the paperback copies of a "classic" novel after years of being forced to read them?  I always enjoyed my English classes, but even so, one of the biggest revelations of my life was the day that I realised that I didn't have to enjoy a book simply because it was hailed as a classic, and that it's okay to like some and dislike others.  The book that changed my mind and got me back into reading these books?  "The Three Musketeers": it's a classic, of course, but it's also an absolute riot from start to finish, much more like the Oliver Reed/Michael York films than a dusty, inaccessible bore.

Which brings me to "Great Expectations".

How shall I put this?  I'm a little under halfway through, and I keep reading other books instead of pushing on to a finish.  That's not a good sign, is it?  Pip is currently in London and growing up fast, but he's just not keeping me interested.  He's an awful lot like David Copperfield, isn't he?

My current distraction is Michael Crichton.  I bought "Jurassic Park" on the recommendation of a colleague of mine, and read it in a single sitting over the course of an 11-hour bus journey to Dar-Es-Salaam.  Last week, encouraged by the success of her recommendation, the same colleague lent me her copy of "The Lost World".  I loved it... more than the first book, actually, as I was far less familiar with the plot (the film tracks "Jurassic Park" quite closely).

Encouraged, I impulsively picked up a couple more Crichton's when I was in town at the weekend. 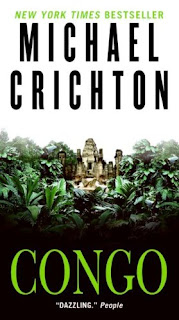 Over the course of Monday and Tuesday this week, I ripped my way through "Congo".  On both evenings, I sat up in the living room in front of the embers of a fire until gone 1am in the morning.  It's not a patch on the two dinosaur books, but any book that can keep you sitting up so late on a school night is clearly doing something right.  I see it's been made into a film, but any film starring Tim Curry is probably worth giving a wide-berth, right?

Funnily enough, given that I enjoyed the book (the plot eventually forcing its way out past Crichton's obsession with pseudo-science and the technical details of the expedition he was describing), reading "Congo" has made me realise that I should be writing more.  Fiction, I mean.

There's a lot of crappy books published, and although this clearly wasn't Michael Crichton's best work, it is still vastly superior to bestselling shit by the likes of Dan Brown.  Even so, as I was reading, it dawned on me that I can write better than this.  That's not meant to sound arrogant, and the plot is skillfully weaved, it's just that I started to see how -- in this book at least -- Crichton seemed to handle many of his characters clumsily, with lots of clunky exposition and awkward descriptions of the way the characters reacted to each other.  If I do half as well as Crichton, I'll be doing pretty well, obviously, but I do think that I can write better than that.

I need to start trying to write some fiction.  Not to a deadline -- and I've ducked Nanowrimo again this year as it's all about the word count and I know myself well enough to know how I'll flog myself until I have the 50,000 words done and dusted -- but I do need to try to write something creative and see where it takes me.

Neil Gaiman is often asked how to become a writer, and he always replies "write".

I intend to.  Short stories, maybe?

And now, some Dickens perhaps?  Nah, next I'm reading "Next" by Michael Crichton.  I'm in the Crichton groove now.  Dickens can wait.

Reading is good.
Posted by swisslet at 19:52