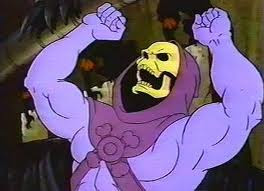 I was reading an article in Runner's World a few weeks ago that was mocking a press release they had been sent.  The press release gloried under the heading "DO YOU SUFFER FROM RUNNER'S FACE?" and read:

"Runner’s Face. And no, I am not referring to the aggressive face an athlete makes prior to crossing that finish line. Runner’s face generally occurs in both men and women ages 40+ who exercise to improve their body, and in doing so end up with a skeletal and bony face. When exercising, an athlete burns off fat beneath the layers of his/her skin. The marked loss of fatty tissue results in a loss of volume which leads to a prominent appearance of the bones, accelerated development of skin laxity and deepening of wrinkles. Though you may look like a 20-year-old from the neck down—your face will easily give away your age. If your skin has taken a beating from pounding the pavement, there are ways to chase those wrinkles away".

It then went on to suggest a few solutions:

"A combination of Botox and injectable fillers such as Restylane, Juvederm Ultra and Radiesse can smooth wrinkles and restore fullness to the face, while further preventing signs of aging. Botox treatments can target lines in the brows or around the mouth, but the result typically lasts about three to four months. Injectable filler treatments to restore volume provide results which last at least a year, and often much longer than that".

WTF?  Seriously?  Do runners actually do that sort of stuff?  Have you seen how much lycra we wear in public?  Those silly, skimpy shorts with the slit up the side? Do we look all that concerned about our appearance?

I laughed along with Runner's World and pretty much every comment underneath the article.

....and then today, I caught a look at myself as I walked past the mirror on the way back to my locker after a 3.75-ish run at lunchtime.  I was gaunt, with sunken cheeks, and seemed to have huge dark smudges underneath my eyes that remained in place for the whole of the afternoon.

Now, I like to think that I'm not a particularly vain person, and I guess that at my age, it's a nice problem to have; a small price to pay for being thinner now than I have been at any point in my life since I was about 17 years old (and I've been taking my belt in yet another notch over the last few weeks)

.... it's just that I'm not too sure that the Skeletor is an especially good look on me.... and I'll shake my Havoc Staff at anyone who dares suggest otherwise.
Posted by swisslet at 19:55