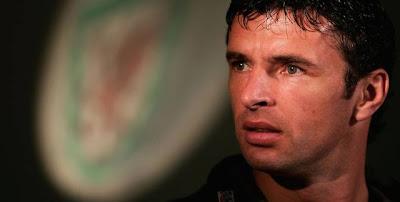 [this - cross-posted with CUAS - was a difficult one to write.  I found it so hard to judge the tone, but I wanted to make the point without seeming gratuitously offensive.  I hope I've managed.  Let me know what you think]

Before I say anything else, let me just make it clear that I think that Gary Speed’s death yesterday, at the age of 42, is unquestionably tragic; an awful, shocking piece of news. It’s difficult for me to imagine a circumstance so terrible that hanging myself seemed the best option, and I hope I never experience anything remotely approaching it. At the moment it seems pointless to speculate on the circumstances surrounding Speed’s death. For me, it’s enough to know that another human being reached the point where he took his own life. Horrible.

Gary Speed was an excellent footballer: you don’t make 840 domestic appearances (including a once-record 535 Premier League games) or win 85 caps for your country without having some talent. Listening to the hysterical coverage over the media yesterday in the wake of the news of his death, however, and you’d imagine that he was one of the most remarkable people ever to live. Mark Pougatch was anchoring BBC Radio Five Live’s coverage, and his reaction was typically overblown: he remarked that he had never, in the whole of his broadcasting career, which includes presenting current affairs programmes, covered a story so remarkable. I can understand why friends and colleagues of Speed – people like Robbie Savage and Shay Given – would be stunned by the news of the sudden death of someone close to them. But everyone else? Was it really a stop all the clocks moment?

If – and it’s apparently by no means certain – Speed was suffering from depression, then we can hope that this news serves to help spread understanding and awareness of an awful condition that can strike anyone, no matter how famous, wealthy or happy they may superficially appear to be. There have already been a number of high profile footballers who have suffered from depression in recent years: coincidentally, Stan Collymore wrote movingly about his own experiences of the illness on Saturday, at more or less the same time as Speed was appearing on the BBCs Football Focus programme, talking brightly of his plans for a future. Less then 24 hours later, Gary Speed was dead and that future - his future - died with him.

It’s only a couple of years too since the German International goalkeeper, Robert Enke  killed himself in 2009 at the age of 32 after battling with depression for six years. It’s an awful, often invisible condition, that strikes without warning and without discrimination and that we understand so poorly.

Speed’s death was sad; the tragedy of a life snuffed out too soon. A tragedy for sure, but also the kind of tragedy that happens every day. Every death is a tragedy in its own way: every soldier or civilian blown up in Afghanistan, even those who don’t receive a funeral procession through Royal Wooton Bassett, every child in the third world who dies of a treatable illness, every cancer victim, every road traffic accident, those Russian sailors not rescued by Prince William… but not every passing will be marked by minutes of silence or of applause, or by tearful fans tying scarves to the gates of football clubs or by special phone-in programmes on the radio. Gary Speed was clearly a much loved and respected man, but it should not lessen the tragedy of his death on Sunday to acknowledge that he was just another human being in a long list whose lives ended too soon. In the UK alone, the statistics tell us that 15 other people took their own lives on the very same day that Speed took his (more than 6,000 each year in the UK and rising). The fact that those other suicides may be less marked does not make them less significant. Crying more loudly doesn’t make the tragedy any greater or the loss any more deeply felt by the bereaved.

Football is a strange sport: it is resolutely hard-nosed and yet also incorrigibly sentimental. The death of such a well-respected football man, especially at such an age and in such circumstances, was always likely to provoke an outpouring of emotion around the country, especially at those clubs where Speed played or in the country he represented with such distinction, both as player and latterly as manager. What has surprised me, however, is the apparent depth of our emotional incontinence, the sudden outpouring of feeling and an apparently nationwide desire to wallow - and judging by the radio this evening, we're still wallowing -  in what seems like a disproportionate level of grief. A tragedy, yes….but a cause of nationwide mourning and gnashing of teeth?  According to the media - and we are led by the coverage of events like this in the media to set the tone - then yes, it is.

I can’t help but wonder, if that other famous recent football suicide, Justin Fashanu, had been found dead in that Shoreditch lockup in 2011 and not in 1998, would he have got the same sort of reaction?

Email ThisBlogThis!Share to TwitterShare to FacebookShare to Pinterest
Labels: CUAS, more important than that, sport