show them all the beauty they possess inside...

We had one of those bloody awful team ra-ra sessions today, where someone embarrassingly dresses up as Father Christmas for amusing interludes between a succession of dull presentations. To keep us interested, there was a quiz running throughout: one of those ones where you have a list of the questions and you have to pick the answers out as they come up in the course of the presentations.

I didn’t take part, obviously, and sat with a thunder face and with hate-lasers trained onto whoever was presenting, giving them evils. The young girl next to me was keenly taking part though, jotting down the answers as she saw them. Given that she wasn’t writing down all that many answers and they seemed glaringly obvious to me, I was beginning to think that she possibly wasn’t the shiniest pebble on the beach…. And then, in answer to the question “Who’s got talent?”, she studiously wrote down “Brittan” onto her answer sheet. It’s bad enough that she didn’t know how to spell the name of her own damn country, but it’s especially unforgivable when you consider that the answer was on the big screen in front of her as she wrote….

The children are our future. 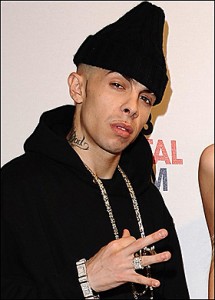 Also at this session was a little pavilion asking for some volunteers to get involved with a programme that we’ve set up with a local Academy school. The school is in a pretty deprived area of Nottingham, and the idea is to provide the kids with the opportunity to get involved with some positive role models who can help them get some exposure to what it’s like to work in an office, to help them learn how to write a business email and to generally offer advice and guidance and so on and so forth, some work experience perhaps, possibly ending up with some of them being employed on Apprenticeship type contracts. All very worthy… I found it very rewarding reading with primary school kids – something which I haven’t picked back up since we came back from travelling, actually – and I can see that helping these kids from some of the poorest areas of the city could also be an enriching experience.

The only problem is that some of the kids were present at the session. I found it boring too, so I don’t blame them for looking bored and fiddling about on their phones, but when you’re going to the offices of a company who you are hoping might offer you work experience and even a job, would it not cross your mind to dress up to try to make a good impression? As my attention wandered during the session, I was amused and appalled to notice one kid who had a blue (fake) Lacoste beanie perched, Dappy style, above his ears and on the very top of his head, was wearing a grey sweatshirt with a giant picture of a smurf on the front and – the pièce de résistance – a pair of saggy-arsed trousers that were belted around the middle of his thighs. No word of a lie, but you could see the whole of his pants before trouser actually started. I was mesmerised. I know that, to him, I’m so old I’m practically dead and he couldn't care less what I think, but how on earth can you even walk with trousers slung that low? Never mind that he even owns them, how on earth did he get up this morning and decide that these were the best of all the trouser options in his wardrobe for a visit to our office?

Part of me would like to get involved with this scheme, but seeing this kid makes me realise that we’re not even from the same planet.

What could I possibly teach kids like this?
Posted by swisslet at 19:06