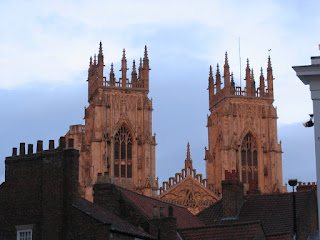 I'm just back from spending a couple of days working in our York store.  The store was fine: the work was hard as always, but this time I went with a couple of my colleagues and we had a pretty good time together, I think.

It's good to go out and help the stores when they're at their busiest, but I had an ulterior motive, of course: I did my Masters degree at the King's Manor (part of the University of York), and I lived in the city for a year or so after that as I worked at HMV and looked for a 'proper' job.  Nottingham is a great city to live in, no question, but I don't think that anyone has ever accused it of being as stunningly beautiful a city to look at as York.  Nottingham's medieval town centre was bombed or bulldozed in the last century, and is now the site of a spectularly ugly ring road; Nottingham castle is a not-very-impressive manor house on a hill; the old lace markets are nice enough, I suppose, and there is some other decent Georgian or Edwardian architecture, but Nottingham does not have much to look at that really soothes the soul.  York, on the other hand.... the Minster, the city walls, the old gatehouses, the 'lesser' churches, the pubs..... I could go on, but above all else, I love the feel of being in an ancient city, with old, timber-framed buildings and ramshackle, narrow little streets. 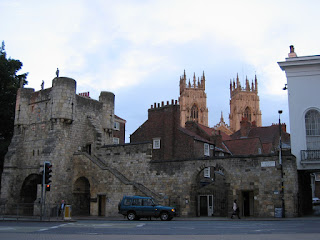 It wasn't an entirely brilliant place to live, I must admit, as at least 50% of the shops in the town centre are really there to service tourists and not locals - something that still looks to be the case - but there is no doubt that York is a beautiful city.  We were in a hotel right on the banks of the River Ouse, and it was great to just spend some time wandering around the old streets, popping into pubs and generally checking out somewhere I spent a very formative part of my life. 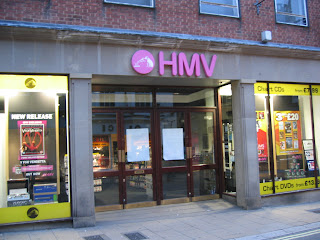 Best of all was a visit to the Hole in the Wall pub on High Petergate, a very short stroll from the Minster and right by Bootham Bar.  This was the pub where I spent many happy hours when I was a student at the King's Manor, just outside the city Gates and about 50m from the pub.  It was my local.  It even gets a mention in the acknowledgements to my Masters dissertation.  The last time I was here, I was horrified to see that it had been given a makeover that featured vast amounts of neon and that the character of the old pub had been entirely ruined.  You know what, someone has converted it back. 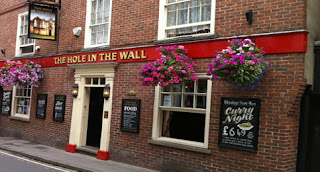 This makes me very happy.