"ABANDON ALL HOPE YE WHO ENTER HERE is scrawled in blood red lettering on the side of the Chemical Bank near the corner of Eleventh and First and is in print large enough to be seen from the backseat of the cab as it lurches forward in the traffic leaving Wall Street and just as Timothy Price notices the words a bus pulls up, the advertisement for Les Miserables on its side blocking his view, but Price who is with Pierce & Pierce and twenty-six doesn't seem to care because he tells the driver he will give him five dollars to turn up the radio, "Be My Baby" on WYNN, and the driver, black, not American, does so." 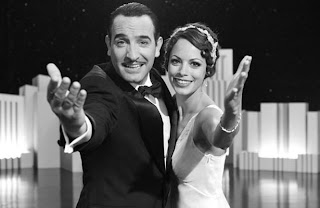 Odd though it might sound, watching a screening of "The Artist" over the weekend brought the opening lines from "American Psycho" by Brett Easton Ellis to mind.

Why? Well, those words foreshadow much of what is to happen in the book that follows. Similarly, the opening scene of "The Artist" shows Jean Dujardin's silent movie star, George Valentin, at the premiere of his latest film, and we watch as his character undergoes torture on the screen. A caption pops up as our hero is having bolts of electricity shot into his head by the dastardly villains... and the first "line" of the movie is "I will not talk!"

Given that the film deals with the silent star's gradual slide towards oblivion with the arrival of talking pictures, it's clear that the symbolism is entirely intentional. 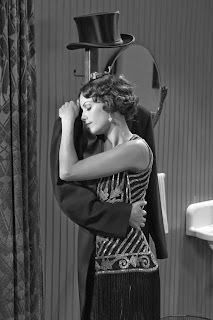 It's somehow very satisfying, in an era when CGI heavy blockbusters seem to be the norm, that cinemas are currently filling out to watch an almost entirely silent, black and white film. Never mind entirely CGI characters, one of my favourite scenes in this film involves nothing more technical than a hatstand, a coat and top hat, but the end result is touching in a way that all the special effects in the world never can be. At the screening I saw, the screen actually narrowed after the trailers instead of widening... to the old, 1.33:1 "Academy ratio" originally used to shoot silent films.. rather than the more normal cinema ratio of 1.85:1 to 2.35:1.  Sometimes less really is more.

It's broadly a story that's been told before, of course, in many different ways, but there's still something wonderfully refreshing watching it being told in this way; never mind the absence of special effects and the other Maguffins of modern cinema, there isn't any actual dialogue here either. Instead, director Michel Hazanavicius is obliged to tell his story the old-fashioned way: through music, dialogue cards and the sheer skill and screen presence of his actors. Jean Dujardin is a delight, but so too is Bérénice Bejo as Peppy Miller, and if there are any acting awards to be given out, then might I suggest that the Academy recognises the work of Uggie the dog? 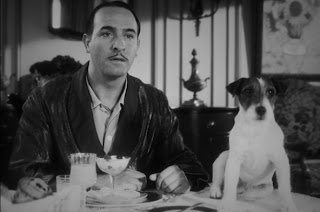