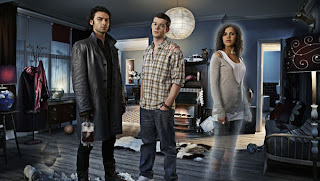 A little while ago, I started watching a charming British sitcom that was screened on BBC3. It has a killer pitch: a werewolf, a vampire and a ghost share a flat. What do they do? Well, they mainly make endless cups of tea. “Being Human” was very popular (by BBC3 standards) and spawned a US remake (the posters for which, when I saw them in New York last year, featured the pitch prominently. Well, it is a great pitch. They also featured a rakishly handsome vampire… well, if it ain’t broke…).

As is often the way though, as the series got bigger, I started to drift away. It wasn’t so much that it was becoming popular – I wasn’t on board right at the start, after all – it was more that the plots themselves were becoming bigger. The domesticity was, for me, getting lost as the vampire and werewolf politics got bigger and bigger and instead of tea being made, whole scenes were now awash with blood. It’s not that I object to the blood, it’s just that I thought the initial pitch was much more interesting and original. After all, vampires v werewolves has hardly ever been done…. *yawns*

I sat all the way through the third series when it was screened last year, but increasingly this wasn’t for me. I didn’t even notice the fourth series was starting until I spotted that it fell into the convenient little gap in my Sunday evening before the new series of True Blood started (C. loves True Blood… for some reason she finds Alexander Skarsgard irresistible….). So I sat and watched.

At the very beginning of the programme, the BBC displayed the hashtag #BEINGHUMAN and the voiceover guy encouraged us to tweet our thoughts as the programme was going on. Well, I thought it was shit, and tweeted as much. Writer Toby Whithouse cut his chops working on programmes like Doctor Who, and I’m starting to seriously wonder if the BBC actually have any writers who aren’t part of the Stephen Moffat/Russell T Davies/Mark Gatiss clique. What used to be a breath of fresh air is rapidly going stale. Russell Tovey (of Doctor Who and Sherlock fame.. .because apparently there aren’t many other actors around the place either) is capable of being brilliant, but he just seemed to spend most of this episode bellowing and BEING UPSET… just as he did in the Hounds of Baskerville episode of Sherlock earlier this year. The plot veered wildly around, occasionally zooming forwards in time several decades to a future that looked to have been stolen from “I Am Legend” with Welsh actors attempting American accents. New facts that seemed extraneous at the time were casually dropped into dialogue and then *gasp* became significant later on (obviously, werewolf blood is toxic to vampires. Who doesn’t know that already after three series? Tsk.). I thought it was ludicrous, culminating in a scene where George, Tovey’s character and a werewolf, managed a partial transformation after STARING REALLY HARD at a picture of the full moon. Well it stands to reason, after all, we all know that pictures of the moon can cause local tidal anomalies….especially REALLY BIG PICTURES.

…a quick look at the hashtag comments on Twitter quickly revealed that I was apparently in a minority of one in disliking what I was seeing. Literally every other person on there was GUSHING about what they were seeing.

I thought that Twitter was where the lynch mobs came out and identified candidates for the latest witch hunt…. What’s with all this positivity? If you read a comments thread underneath a TV review on a newspaper online – or, indeed, under ANY article published online – then you usually only see a torrent of complaints (the BBC “have your say” threads are one obvious example of this where people never get tired of complaining that their licence fee has been spent on x, y or z….but you can pretty much pick anything online and see much the same…except maybe the recipe pages of the Guardian, which are a blissful haven and a surprisingly useful resource for tips on how to make the best damson gin or beef stew….).

When did Twitter get so positive? What happened to all the snark?

And over something so crap, too? What a missed snark opportunity.

As a footnote, in spite of deciding that I wasn’t going to bother with Being Human any more, I actually watched the next episode too (it is such a convenient TV watching slot in our house). It was lots better. I didn’t bother with the hashtag this week, mind. Maybe they all hate it now.
Posted by swisslet at 20:33