maybe misery, maybe nothing at all....

Well, that was a rubbish day at work.

I'm doing two jobs at the moment: my own job and a role on a huge, strategic multi-million pound programme.  Naturally, both are full time jobs.  Obviously I am only being paid to do one.  My own job I can largely do standing on my head, but the other is more of a challenge.  Oh, it's not because the work itself is particularly difficult per se, it's just that - as multi-million pound strategic programmes always seem to be - the other one appears to be managed by five year olds (as opposed to by eight year olds, like other, less important projects in my office).

This new job, which I'm effectively doing in my spare time at the moment, has involved going to a succession of meetings where the business programme team jab their fingers at me and tell me about all the things that we apparently said that we would do and haven't done.  It's uncomfortable.  I'm a conciliator by nature and I really don't like these kinds of meetings at all.

So, finally, this week I found a couple of days to pick my way through the documentation to get to the bottom of who had actually agreed to do what.  Guess what: the programme team are blowing out of their arses; making stuff up as they go along and trying to make it all my problem.  I don't think they've actually bothered to read their own documentation, never mind ours: it's incomplete and riddled with contradictions and assumptions.  It's a mess.

Obviously, picking a fight with them about this probably isn't a very constructive way of moving things forwards.... but I've got to tell you that I'm fast reaching the point where I'M JUST NOT GOING TO TAKE IT ANYMORE. 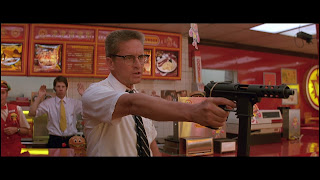 I JUST WANT A LITTLE BREAKFAST!

Hmmm.....on reflection, maybe I should have listened to something other than "The Holy Bible" when I read that documentation at my desk this afternoon.  I love the Manics to bits, and that's a brilliant record, but even Nicky Wire would probably admit that it's not exactly a pick-me-up, happy-go-lucky, mood-lifter of an album.

You have to laugh.  How does any big company make any money at all?
Posted by swisslet at 20:06