On 31st August 1991, I was lucky enough to be at Wembley Stadium to watch Guns n'Roses perform live on a scorching hot day.  Apart from Steven Adler, this was still the classic G'n'R lineup and the Use Your Illusions albums were still to be released.  I was seventeen years old and it was just the most enormous rush simply to be there to watch one of the most exciting bands in the world.  One of my friends had seen the band's performance at the Donington Monsters of Rock festival in 1988, but since then we'd all been listening to "Appetite for Destruction" almost incessantly and couldn't wait to finally see them live.  This was the same day that Nine Inch Nails were bottled off the stage, but I have no memory of that, although I do remember Skid Row playing and then waiting something like three hours before the headline act took to the stage.  As I recall, we passed the time by joining in with the rest of the crowd in cheering every time the big screen cameras fell onto a pretty girl sitting on someone's shoulders, and then cheering even louder when they lifted their tops.  Those were the days, eh?

It turned out to be Izzy Stradlin's last gig with the band and the set list was:

Axl Rose played Nottingham Arena with a band calling themselves Guns N'Roses a couple of weeks ago, although Axl is the only remaining member of the line up that I saw that day in 1991.   Mark and Graham went and asked if I wanted to come along, but to be honest, I saw pretty much the classic line-up back in the day and I didn't really feel much need to go and watch a band pretending to be them.  Axl might be older and fatter, but it doesn't sound like he's changed very much over the years: twenty-one years later and he still kept the crowd waiting for hours before taking to the stage a few minutes before the venue's nominal curfew and then played until 01:30 in the morning.  Good job it was a Saturday night, although judging from Mark's review of the gig, half the audience left long before they got to the end.  Can you imagine attending this sort of a gig on a weeknight if had babysitters or any great distance to travel?  I know I must be getting old for even thinking about practicalities like that, but Axl is even older than me and is still behaving like a spoilt child.

Ask Axl and he'll probably tell you that Guns n'Roses have never split up.  Perhaps, but maybe they should have.  They were a great band.  They might have their moments now, but it's hardly the same, is it? 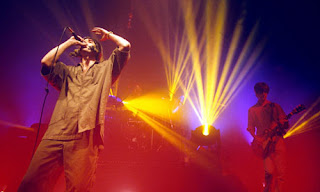 Speaking of truly great bands, it's not long now before the newly reformed Stone Roses play those massive gigs in Manchester.  I haven't got a ticket, but the truth is that I'm not enormously upset about it and actually didn't even try and get one.  Apart from being miserable enough to think of the inconvenience of the trip up to Heaton Park and the likely beer-chucking awfulness of the crowd (plus the simple fact that Ian Brown - every time I've seen him live, at least - couldn't carry a tune in a bucket), the Stone Roses are another band that I saw back in the day.  Alright, so "Second Coming" had already been released and Reni had already left the band, but it was still a thrill to hear them open their set with the 1-2-3 punch of I Wanna Be Adored, She Bangs the Drums and Waterfall.

Unlike Guns n'Roses, where I was on board pretty quickly, it took me a while to appreciate the Stone Roses.  In fact, I hated them at first.  It wasn't until a couple of years afterwards that I began to get past what twats their fans looked and could appreciate quite how good that debut album really is.

I saw them on 29th December 1995 at Wembley Arena, backed by the Manic Street Preachers, who at that stage in their career had only recently put out "The Holy Bible" and their fans were still wearing leopard print leggings and eyeliner.  The Roses were pretty good, I thought, but even then I knew that the material from Second Coming wasn't anywhere nearly as good, even if the kids standing in front of us were word perfect on all of the new songs.

If the Guns n'Roses show was Izzy Stradlin's last gig with the band, that show at Wembley Arena was John Squire's last with the Roses before they reformed this year.  Maybe I'm some kind of a jinx?

The set that night was I Wanna Be Adored, She Bangs The Drums, Waterfall, Ten Storey Love Song, Daybreak, Breaking Into Heaven, Your Star Will Shine, Tightrope, Tears, Love Spreads, Good Times, Made Of Stone, Driving South, I Am The Resurrection.  What a way to finish.  I notice at their first comeback gig the other night that they didn't play "I Am the Resurrection" and they didn't do an encore.  How many fans do you think saw them leave the stage and thought they would be nailed on to come back and play that classic?  How disappointing!

I was 21 years old when I saw the Roses that night.  21!  It made me smile on the radio the other day when they were playing out the reactions of some of the fans who had been lucky enough to make it into the crowd for the Stone Roses first comeback gig in Warrington.  They had some 21 year old on, and he was banging on about what an amazing band the Roses were and how he was so happy to have finally seen them.  They broke up in 1996 when he would have been, what.... 7?

Still, the end for the Roses was a mess and they deserved better, I think.  I hope the comeback works out well for them.... even if I am a bit alarmed at the news that they've apparently signed a new two-album record deal.  New material?  Really?  Second Coming is hailed by some as being massively underrated, but I listened to it again the other day and it still sounds like muddily recorded, self-indulgent shite to me.  Let's hope they can do  better than that.  Shouldn't be hard....

Nostalgia, eh?  It ain't what it used to be.

I might not be paying to see Guns n'Roses or the Stone Roses, but one band who I would pay to see if they got back together would be the Smiths.  How could I not?  I've never seen them, apart from anything else.  I'm old, but not that old!

Saying that I would go and see them, I desperately hope that it never happens....  It just couldn't be the same, could it?
Posted by swisslet at 19:34