"Yeah, so I can't go to the team thing after work on Thursday.  Why not?  Because I've been invited to a book launch.  Yeah.  Maybe I can catch up with you guys later."

Contrary to what some people at work now inexplicably seem to think, I don't go to book launches all the time.  In fact, last week's was my only one to date, but I'm lucky enough to be friendly with the Nottingham author David Belbin.  We met through friends and have bumped into each other at gigs for a few years now.  He's best known for writing Young Adult fiction, but I read 2008's "The Pretender", his first 'adult' novel, and was very impressed.

Last year, David had a number one in the Kindle chart with "Bone and Cane", a crime novel set in Nottingham in the run up to the 1997 General Election.  It's a great read, and I was pleased to be able to contribute a five star review on Amazon (apparently these things help to trigger the algorithms that recommend books on Amazon and thus contribute directly to increased sales).   But hey!  I now knew a number one bestselling author.  How cool is that?

A few months later, David mentioned to me that the sequel would be coming out on Christmas Day, and asked if I would like a pre-release copy for my kindle in exchange for another review (to try and trip those algorithms again).

Of course I would! 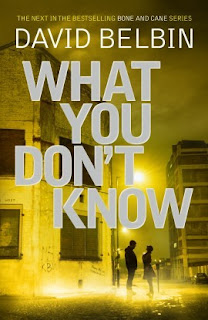 I'm pleased to say that I enjoyed "What You Don't Know" even more than it's predecessor: the plot is darker, but the book doesn't deal in a black and white world of clear-cut rights and wrongs and understands that the world is made up of shades of grey.  I genuinely thought it was a fantastic read and was more than happy to post another five star review.

For some reason, although the kindle edition was released in December, the print edition was only released last week.... hence the book launch.  I nearly didn't go: I'm the kind of guy who stands in the corner at parties checking out the bookshelves and CDs, and I find socialising with people I don't know a little stressful.  But hell - do I get invited to so many book launches that I would be happy to sit at home on my own instead?  No.  So I went.  It was good... and apparently I'm on the launch video.

I've already read the book, of course, but I felt moved to buy another copy to support my friend and to maybe get an autograph too.  I joined the queue.  Did I want it personalised or just a signature and a date so I could stick it on Ebay?  Oh, come on!  I'm not going to stick it on Ebay. Personalised please.

I walked away, delighted that my friend... the number 1 bestselling author... had just dedicated a book to me, someone who had made a small contribution to his success.

I looked at what he'd written.

Now I remembered that, from time to time, David calls me Ben.  I've only really got myself to blame, as I don't blog or tweet under my real name, and when he's done it before, I've never really corrected him as it's always easier to just let it slide.  But now I had a book dedicated to a Ben.  I nearly did nothing, but in the end took the bull by the horns and went back.

David was a little embarrassed, but he immediately knew what he'd done and what my name really was.  He reached for a new book, but I stopped him.  This one's fine. 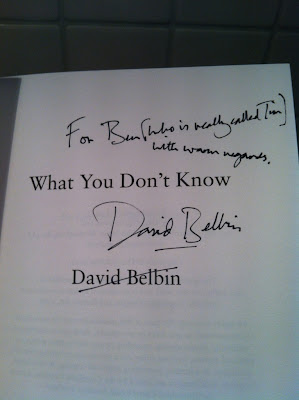 So maybe this isn't worth a damn on Ebay, but it really works for me.

If I ever get too full of myself, just all me Ben.