and god save your mad parade.... 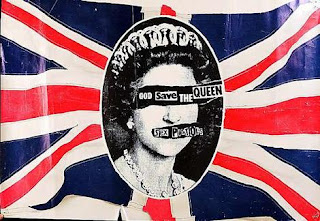 There’s a guy at my gym that I see almost every time I’m there. He used to work in the same building as me, so I recognise him from having seen him around the office… but the main reason that he stands out is that he always seems to be wearing an England football shirt.  Now, if this was just his gym kit, then perhaps it wouldn’t be so remarkable, but I’ve seen him arriving at the gym in an England away shirt and then change into a home shirt for his workout. As if that wasn’t bad enough, he also seems to have an England football branded towel that he uses in the showers. I suppose you could excuse this in a seven year-old, but this guy is forty if he’s a day.

He can wear what he wants, of course, it’s just that it seems a little strange to me that someone who is old enough to think for themselves would choose to define their own sense of who they are so tightly with their national football team and to display that so obviously to everyone else.  John Terry - should you need reminding - is a member (and former captain) of the England football team.  Is that the kind of person you want to represent you?  Not me.  The towel, it seems to me, is the finishing touch too much. Perhaps he doesn’t fancy a three lions tattoo on his calf?  (or maybe he's already got one somewhere else....)

I mention this because it strikes me that a similar kind of mentality has been on display all weekend as people have celebrated the Queen’s Diamond Jubilee. I don’t really have an axe to grind against the Queen herself: this woman has dedicated her life to her country. For all the wealth and privilege her role has brought her (a personal fortune of over £300m, an art collection valued at £10b, Property worth £7b….) a gilded cage is still cage…. She’s 86 years old now, and it looks as though the only way she will ever escape from her cage is by dying. Until then, her life will continue to be about smiling, waving and showing polite interest in anything that she’s pointed at (including, it seems, about six hours worth of boats floating down the Thames. Each one as fascinating as the last, I’m sure….I can’t help but wonder if the Duke of Edinburgh’s bladder infection is tactical and he can be found being ‘treated’ at the Old Navy club in Mayfair?).

I didn’t watch one second of the weekend’s festivities. I’m grateful for the extra Bank Holiday, to be sure, but I certainly felt under no obligation to spend it celebrating the life and reign of the Head of State. If you watched every moment of it, then good for you… but I must admit to being more than a touch baffled by the people I heard interviewed who had spent 24 hours in the rain to get a good position to watch the flotilla, and then another 24 hours making sure they got a good spot on the Mall. “Things like this: it’s what makes Britain great, isn’t it?”

You remember when Kim Jong Il died and the world genuinely marvelled – and laughed in bemusement – at the millions of North Koreans who took to the streets in a mass display of national grief? This weekend, that was us; the rest of the world was looking at us and shaking their heads in amazement at the hordes of people standing in the rain to celebrate a moribund institution.  A relic.

I have a fundamental problem with our monarchy. It’s nothing personal, but the Queen represents something that I believe has no place in a modern democracy: she personifies the principle that some people are simply born better than others. All those people out waving union jacks in the street are effectively tugging their forelocks in a display of class-ridden deference to an inequality that is ingrained in our society. You can argue all you want about the tourist dollar the royal family brings into the country (and as long as Windsor Legoland has more visitors than Windsor castle, you’ll never convince me on that point either), but for me it’s a much more deep-seated problem; a boil that we really should get round to lancing.  America doesn't do everything right, but enshrining in the constitution the right of any natural born citizen to become president is one of the things that Franklin, Jefferson and John Adams got just about bang on.

I’m sure she’s an amazing woman, but her silence and inscrutability have allowed people to reflect onto the Queen any virtue that they wish. Stoic, noble, dignified… well, if you like, but on the other hand she happily reads out the words given to her by whichever party happens to be in power, and in her Christmas Speech of 1997 she spoke more of her sadness for the decommissioning of the Royal Yacht Britannia than for the death of her grandchildren’s mother.

Apparently the monarchy is currently enjoying an approval rating of 88% and it seems unthinkable that Britain will ever change. Well, let’s see, shall we? Some of those people interviewed on the banks of the Thames and queuing on the Mall were asked what their views were on a possible King Charles…. Their response? A long and significant pause before a somewhat terse “no comment”. That’s the thing about a hereditary monarchy: you don’t get to choose who comes next. No matter how much you love Wills and his “commoner” wife (and what a festival of snobbery that wedding was by all concerned, the hoi polloi most guilty of all), you don’t get to have him next. And if you don’t like the idea of Charles and his current wife sitting on the throne, then you’re not much of a monarchist, are you?
Posted by swisslet at 19:45