One of my oldest friends is getting married in October.

Although I'm delighted for him, obviously I've been taking the piss.  To be honest, it's a little like shooting fish in a barrel: he's got a website with a countdown clock (124 days to go!), video invites and everything....  but that's all the more reason, right?

I was out in town the other day, when I saw a set of products that made me think of the wedding. 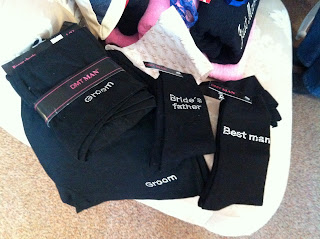 I took the snap and immediately sent it to my friend with an accompanying message:
"I assume you have the whole diamante socks/pants thing well in hand?"
...you know, they've got everything else covered, etc.  I'm a funny guy, no?  I nearly caused a panic a few weeks earlier when I was visiting the happy couple and I innocently asked if it was a hat wedding.
The Bride-to-Be stared at me.  "What's a hat wedding?"  I could see the panic behind her eyes at the thought that she might have missed something.  A few days later, I got a very serious message telling me that apparently lots of other people would be wearing hats, but it was up to us if we wanted to wear one or  not.

A response to my message quickly came back:
"Where on earth do you spend your Saturdays?"

Ooh.  Good comeback.  Straight onto the front foot.  You see, at this point, I should have maintained a dignified silence.  Explanation is only going to make me look bad, and the gag wasn't at my expense....So I immediately sent a message back with an attempted explanation:
"It's the lingerie shop where C. orders her bras and stuff.  After I've watched NZ v Ireland, obviously".  Do you like how I've managed to mention that I've already got in a good man activity that morning.  I'm all testosterone, me.
"A. goes to places like that with the girls!

"Well, it was on the way to the Farmers' Market and she was picking up an order, in my defence.  To boost my man credentials, I'm going to look at HDTVs now"