I spent most of my Sunday afternoon, including the vast majority of the Wimbledon final, in the car driving down to Stanstead Airport - some 2.5 hours away.  My reason for doing this?  To deliver a satisfyingly heavy payload of sweets to a friend from New York who was passing through London.  She's not nicknamed "Gums" for nothing... I'm fairly confident in predicting that if her current rate of sugar consumption continues, she'll have no teeth left by the time she hits 40.

There aren't many people I'd spend that much time in the car for just for the pleasure of a couple of hours in their company, but Jane is definitely one.  There probably also aren't too many attractive 20-something year old women that C. would be comfortable with me spending time with on my own.... but Jane is definitely one.  She's a special girl.  Besides, C. would have been there too if she hadn't been spending a bit of time with her parents.  I knew she was a good'un right from the moment she told that Jesus joke in the back of the truck full of strangers on the way out of Cape Town at about six in the morning.....

Besides, we're planning a trip to New York in November, and you can never have too many friends who live in New York, right? 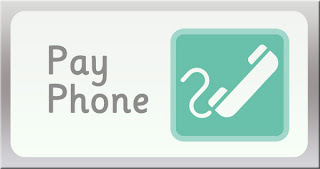 So, I spent a lot of time in the car driving up and down the A1.  Mmm.  Interesting.

On my way back home, I did notice a sign similar to the one above on the side of the road.  A payphone?  You're trying to entice me off the road with the prospect of being able to use a phone I can put some spare change in to make a telephone call?

I'll be honest, I don't spend a whole lot of time in Cambridgeshire,  but surely even they've got mobile phones by now.  With their extra fingers, they're probably fairly well adapted for texting, too.....

In the age of the free, pay-as-you-go mobile phone, aren't payphones are bit, well.... redundant? (although, clearly, Maroon 5 still use them... )  I'm old enough to remember the days when I used to sit in the front room of my parent's house ringing the front room of the house of one of my friends on the off-chance that they would answer the phone and that he would be there.... but I'm pretty sure that no one really does that any more, do they?  Why would you, when you can take a phone out of your pocket wherever you are and ring that friend's phone which is likely to be in his pocket, wherever he is?

Sure, you can run out of battery and you might not be able to get full wireless internet via 4G in the wilds of rural Cambridgeshire..... but that's no reason to maintain a payphone network, is it?

Or maybe Cambridgeshire is like a living museum?  Have you seen the University?
Posted by swisslet at 19:24