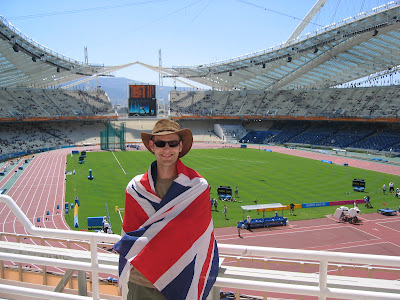 As sure as night follows day, since the announcement that London would be hosting the 2012 Olympics, there has been almost constant moaning about it: how much it costs, the siting of the stadium, the ticketing arrangements, the sponsorship exclusives, the impact it has on the rest of London... even the non-selection of David Beckham for the GB football team.  Every possible aspect of the Games seems to have been up for examination and for complaint.

The opening ceremony is now almost close enough to touch - it's next Friday; athletes are starting to arrive and the papers are full of stories of the buses that got lost between Heathrow and the athlete's Village and, more seriously, the apparent failure of G4S to provide sufficient security cover for the games.  Even my Facebook feed seems to be filled with more people carping about the Olympics than it is people getting excited.

Well, I don't know about you, but I'm excited.

I love the Olympic Games.  I can barely remember anything about Moscow in 1980, but I remember Daley Thompson and Carl Lewis from Los Angeles, and by the time the Seoul Games arrived, I was getting up early to watch that 100m final and the GB men triumph in the gold medal match in the hockey.  Linford Christie and Sally Gunnell in Barcelona; Michael Johnson in Atlanta; watching Jason Queally winning our first gold medal of the Sydney Games as I lay in bed one Saturday morning... and throughout it all, Steve Redgrave winning gold medal after remarkable gold medal in the rowing.  I was lucky enough to spend 10 days in Athens for the 2004 Games, watching Kelly Holmes with her eyes on beanstalks as she won the 800m in the stadium, being mildly underwhelmed by the men's 100m final but thrilled by the Decathlon in spite of the fact that it mostly took place at odd times of the day in front of a mainly empty stadium (see picture above...).  We watched the badminton, the beach volleyball, the weightlifting, some football, some table tennis and lots of great athletics in the stadium.  Best of all was watching Matthew Pinsent dragging the men's coxless four across the finish line mere centimeters in front of the Canadian crew.  I can still hardly believe that I was lucky enough to be there and to see it with my own eyes. We knew we had the gold before the crew in the boat knew.  Right up with the 2005 Ashes at Trent Bridge as the best sport I have ever witnessed first hand.

Yeah.  I love the Olympics.  I watched "50 Great Olympic Moments" on the telly last night, and I was in pieces several times: if Derek Redmond doesn't get me, then you can be pretty sure that watching Muhammed Ali lighting the flame in Atlanta will.  Even Erik the Eel has that effect on me, for heaven's sake.  It's spine-tingling stuff and I can't wait for the next installment.  I've been wearing the Team GB lanyard I was given for my birthday and I've ordered a Team GB t-shirt.  Trust me, I'm all over this Games.

I don't have tickets to watch many medals being won this time around, but I've taken some time off work and I'm delighted to have tickets to watch anything at all and to just feel a part of an Olympic Games taking place in my own country.  It's really very exciting.  Taekwondo, handball, volleyball, fencing, archery, table tennis, weightlifting, hockey, badminton and a morning in the stadium.  Bring it on!  I hope GB win a hatful of medals, but I'll be cheering like a lunatic for anyone and everyone regardless.

I'm also very much looking forward to the weekend in September when I have ground passes to watch the Paralympics in the Olympic Park and some tickets to the swimming.  If the endeavour and sheer drama of the Olympics has me in bits, just imagine what the Paralympics does to me.

Athens got a really bad press in 2004 and was widely criticised for not being ready for the games.  I thought it was fine.  Sure, there were one or two rough edges, but the Games themselves were brilliant.  Sydney 2000 is remembered as the best Games ever, but how many people remember the carnage when they got the height of the vault in the ladies gymnastics wrong?  One or two buses might get lost, and I'm sure a host of other things won't run as smoothly as everyone would like... but I think London 2012 is going to be amazing and I'm going to be there.  You could be too... there are still tickets on open sale on the Olympic ticketing site.