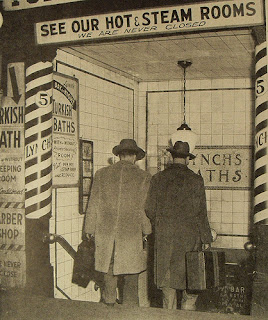 I'd promised myself a sauna as motivation to get myself to the gym for a swim.  I dragged myself through the water for 44 wearisome laps and then headed off try to ease some of the aches out of my poor, broken body in the heat.  No such luck: the sauna was full to bursting, so - reluctant to give up the idea of getting a good sweat on altogether - I headed into the steam room.

I'm not really a steam room kind of a guy.  The sauna in our gym isn't what it used to be, it's true.  Gone is the little stand of heated stones that you could pour water onto, to be replaced by an invisible heating element of some kind.  It's not as hot as I'd like, but it's still preferable to a steam room that, if you sit in it for more than about five minutes, seems to drain entirely of steam before refilling.  There can't be many things worse than a bunch of hairy-arsed men sat on wet plastic benches in their towels pretending that they can't see each other when they clearly can.....

Anyway.  The sauna was full and so I entered the steam room.  There was enough steam to slightly obscure my vision, but I could see that there were already four other guys in situ, two engaged in an overly-loud conversation.

"So, his teacher asked is anyone knew what the minimum wage was.  No one said anything, so he stuck his hand up and said 40k.  He was being deadly serious too."
"How did you hear about that?  Did he tell you?"
"No, the teacher told me over dinner."
"You had dinner with the teacher?"
"Not in a weird way"
"When you have dinner with your teacher, it's always in a weird way" 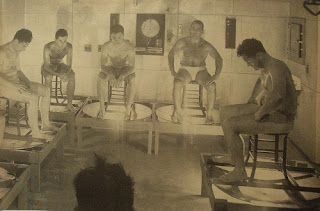 The steam cleared a little, so I looked up from a studious contemplation of my navel.  They were young.  Students, I assumed.  They continued.

"I saw a programme a while back that had different people on and how much money they earned."
"Oh yes?"
"Yeah.  This is John from London, he's a merchant banker and earns 90k.  This is Bob from Bradford, he's a plumber on 20k.  I remember watching it and wondering how on earth anyone could live on £20,000."
"Yeah."
"....But now I'm 20, I find myself thinking that 20k would be pretty nice"
"Absolutely.  So are you ready for Vegas?"
"Sure.  We're going to be getting three times as wasted as normal.  You know they give you a bottle of vodka in these places.  Not Smirnoff or anything.  Grey Goose....."

At this point, they sadly got up and left.  Unfortunately, they continued their conversation in the showers for the next five minutes, talking loudly enough that I could still hear them even from 20m away.

I couldn't help but notice that they'd hired towels too.  As if the gym membership (and the trip to Vegas) wasn't expensive enough.

With guys like that coming through the further education system, I'd say that the future is in good hands.  Or should I say, the International Futures Market will be in good hands.

On a related topic, A Level results came out today, and a colleague of mine was proudly telling me how his daughter had got ABB and would be going to Sheffield University later this year.  She's been something of an awkward teenager, I think, so I could tell that he's pretty relieved that she's going to finally be leaving home.  Sheffield is only a short hop up the motorway from here, so she'll be close enough, but also far enough away..... Apparently she was thinking of living at home, but my colleague has been busy telling her how much she'll be missing out on if she doesn't stay on campus.  Although, he also tells me that she doesn't drink....

I wonder if there's anything else about his daughter he might be in denial about, eh?
Posted by swisslet at 20:42