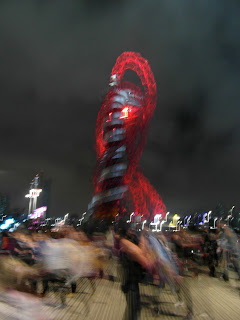 There were a couple of times when I was last in the Olympic Stadium, a couple of weeks ago, when I became aware that the crowd was walking a fine line between offering warm encouragement to the competitors, and congratulating them patronisingly just for turning up.  The first time was a Palestinian athlete who finished more than a lap behind Mo Farah in the heats for the 5000m; the second was the Saudi girl competing in the 800m heats wearing a full hijab.  Neither athlete was in the least bit competitive, but both were roared to the finish by the excited crowd.  In the end, I decided that it was an entirely understandable and heartfelt gesture by a crowd that was delighted to be there at all to enjoy a fantastic event.  Besides, the Palestinian ran a personal best and I think everyone realises that, for a Saudi female athlete, being allowed to compete in the Olympics at all is a small triumph all of its own. 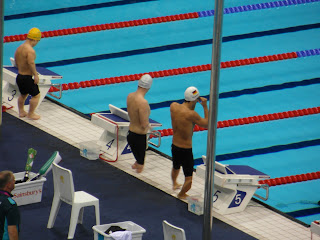 With Paralympic sport, this line is much harder to identify.  Oscar Pistorius spoke before the games about how Paralympic athletes don't want to be celebrated just for turning up, they want to be celebrated for their achievements in competition; in Paralympic sport, just as in any other sport, some people will win, but more people will go home empty-handed for all their efforts.   I understand this, but I was lucky enough to spend two full days watching Paralympic sport and a variety of outstanding, incredible athletes.... but with the best will in the world, it's almost impossible to forget some of the things that these people have overcome just to get to the starting line.

I felt this most intensely at the very first event we attended: the swimming.  In lots of the other sports, disabilities of all sorts are slightly hidden, whether by wheelchairs, prosthetic limbs or simply by clothes.  At poolside, these things simply can't be hidden: legs and arms are taken off and left at the end of the pool, tracksuits are shed, wheelchairs are discarded, and the athletes are left exposed in their swimsuits.  I watched a Swiss athlete with both arms amputated at the shoulders swim the 400m freestyle, dolphin kicking throughout.  She didn't win and ended up finishing something like 5th or 6th, well back in the field, but I knew from looking at the clock that she was swimming more than twice the speed that I can manage.  With NO ARMS AT ALL.  My overwhelming emotion when watching this, or watching a man with no arms and stumps for legs, or watching almost any of these amazing athletes was to feel humbled... utterly and completely humbled by what these athletes - every single one of these athletes - has achieved.  It's true that very few of them will win medals at these games, but that doesn't make what they have achieved any less remarkable in my eyes.  I enjoyed the Olympics enormously, but the Paralympics are almost overwhelmingly inspiring.  These athletes refuse to be defined by what has happened to them and what they can't do: instead they focus on finding out what they can achieve.  We can all learn lessons from that, can't we? 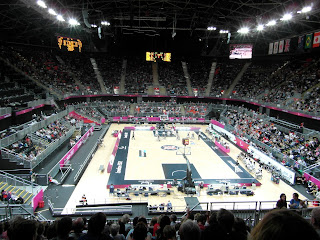 If you've ever wondered quite how robust wheelchair users are, and think that they might be really delicate because of their physical limitations, then wheelchair basketball will quickly disabuse you of that idea.  It's fast and it's physical, collisions are common and there's a pile of spare wheels at the side of the track to carry out running repairs on damaged chairs.  To be honest, I enjoyed watching this much more than able-bodied basketball, but I'm the first to admit that I'm not a connoisseur. 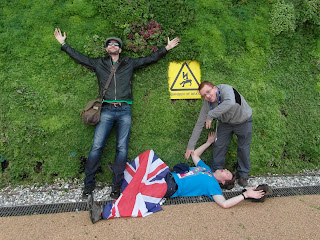 I enjoyed the wheelchair tennis that we saw too, but if I didn't post a picture of me gurning like a fool, then it just wouldn't be the same around here, would it? 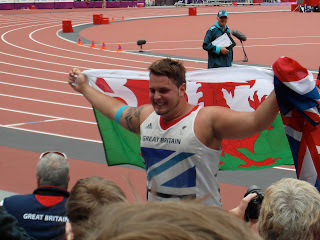 Sunday for us was all about the track and field, as we had tickets to both the morning and the evening sessions of the Stadium.  In the morning we were lucky enough to be right behind the discus competition and to be within touching distance of this man as he won a gold medal for Great Britain.  He's 21 years old, and his family and girlfriend were sitting just next to us.  There wasn't a dry eye in the house. Oh, and he's missing a leg.  We actually stopped to congratulate his coach (at the bottom left of the picture above) on the way out of the stadium.  "Good job, coach!" and shook him enthusiastically by the hand.  He seemed a little bashful, to be honest.  I'm fairly sure that he doesn't get this sort of thing very often. 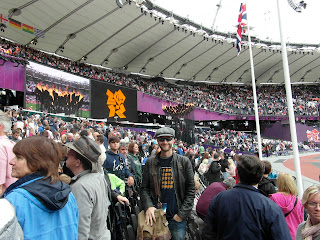 It was a superb morning, actually.  And we were close enough to the Paralympic Flame to practically feel the heat it was throwing off and to enjoy a fantastic ladies javelin competition for partially-sighted athletes.  There's something incredibly moving about watching the care with which these athlete's guides fuss over them to make sure that they know where they are, that they're standing in the right place and ready to do their thing.  Guide runners in the visually restricted track events are incredible athletes in their own right: after carefully and almost lovingly making sure that their companion is settled in their blocks and has their hands behind the line, they then have to run well enough to keep up with these superb athletes and to have the presence of mind to make sure that they cross the line behind them.  Is it any wonder, then, that one of the Russian guides was a little tearful on the podium as the pair picked up their gold medals? 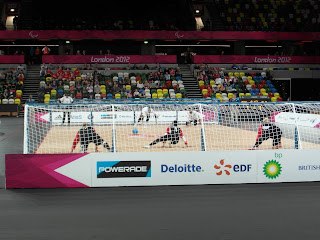 Between athletics sessions, we managed to see some Goalball in the Copper Box.  This is an event played by blind athletes, hurling a 1.5kg ball filled with bells at each other trying to score goals.  Naturally, if the athletes are going to be able to hear the ball, then the crowd must watch in total silence.  I watched handball in the venue during the Olympics, and it was pretty noisy, but the hush here was amazing.  People were tip-toeing to the toilet, for goodness sake! 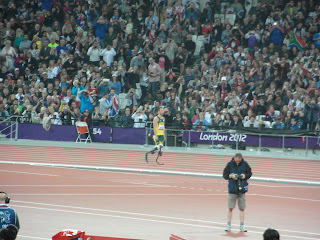 The stadium session was in theory all about Oscar Pistorius, the poster boy of disabled sport, but he was stunning beaten on the line in his 200m final by a young Brazilian guy.  Sadly, Pistorius then showed himself to be something of a sore loser.  I know he desperately wanted to win, but surely the mark of a great champion is graciousness when you do lose.... it's ironic, of course, that he accused his Brazilian rival of getting an unfair advantage in his blades.... exactly the same thing that he is accused of doing when he competes with able-bodied athletes. 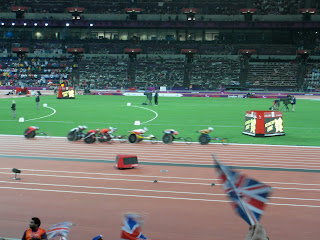 Most amazing of all was David Weir's victory in the 5000m, the last event of the evening.  I wasn't lucky enough to be in the stadium when Mo Farah won his medals, but the reaction of the crowd as we roared Weir around is something that I will never forget.  Amazing. 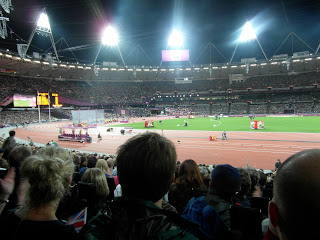 I loved the Olympic Games, but I have been enjoying the Paralympic games even more.  I've watched a lot of live sport over the years, but I don't think I've seen anything that has moved me quite as much.  Inspiring and humbling.

Can't I watch these guys every week?
Posted by swisslet at 21:31

Email ThisBlogThis!Share to TwitterShare to FacebookShare to Pinterest
Labels: more important than that