So I've been listening to Muse.  Apparently not everyone likes them, and some people think they're pompous and bombastic... but that's okay.  What they think of Muse really doesn't bother me.  They are a bit pompous and bombastic, but actually I quite like that about them.  This isn't my favourite song of theirs by any means, but it's the one that's currently stuck.  My favourite Muse song - and it should be everyone's favourite Muse song - is "Knights of Cydonia".  Best running song ever written.  TRUEFACT.

Morrissey – “First of the Gang to Die”

It's hardly a secret that I like a bit of Moz from time to time.  He's clearly a bit (a lot?) of an idiot, and I'm not sure he's done anything really worth listening to in a while... but he has done some stuff that can't be touched.  The Smiths obviously, but also some of his solo work too.  I'm not saying that this song in particular is a stone-cold classic, but it is catchy and it does contain some cracking lyrics.  For all his many faults, not many people write lyrics like our Moz.

Queen – “We Will Rock You” (Austrian piano version)

OK, so you know I said how I like the pompous bombast of Muse?  Well, I really don't like the pompous bombast of Queen.  Some of their songs are okay, I guess, but I just plain don't really like'em.  Go figure.  Anyway.  We were in Vienna the other day seeing our friends.  They like their classical music and there is musical talent all through their family.  Hell, they sang at our wedding.  It's not unusual for us to wake up of a morning whilst we are there to hear the 16 year-old daughter and 12 year-old son at the piano singing.  One evening, we were treated to them practicing this song.  It sounded great, but I'm pretty sure that the phrase "We Will Rock You" has never been used so inappropriately.

Another song that I heard being sung by the impromptu family band at a garden party to celebrate a 40th birthday whilst we were in Vienna (in fact, the birthday was the reason we were in Vienna).  I'm sort of casually aware of this song, but it's good, isn't it?  Oh wait.  Was this on Glee?  Ack.

The Wanted - "Chasing the Sun"

I have absolutely no idea why this was in my head this week.  I had to look up the song title based on what I thought were the lyrics, and only found out the name of the band from that.  How does that find it's way onto my internal jukebox?  Is it used on an advert or something?

And WTF?  I actually had to think what this was the theme tune to... and when I worked it out, my next question was to wonder how on earth I ended up thinking about this.  Any suggestions?  As someone in the office said, why haven't they made this into a film yet?  I thought perhaps Scarlett Johannsson as Christine Cagney, but I thought the suggestion of Angelina Jolie as Mary Beth Lacey was just ridiculous.  Ridiculous.  Kate Winslet, maybe?

Cash is a karaoke speciality of mine, obviously.  "Hurt" is a bit of a mood killer, so usually I line up for "Ring of Fire".  And yes, at the stag do in Scarborough last weekend, I did wheel that out.  John Mac then told me that he would do "Folsom Prison Blues" if I would do it with him.  So the next night, we did.  And we were AWESOME. 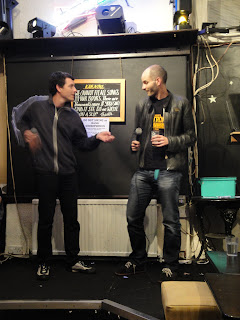 Nowhere near as awesome as Deneal and his Elvis showpiece though.  I reckon that the guy who runs the karaoke in Scarborough is something of a God to his people.  He certainly seemed to think so.  Knowing full well that he was about to call someone up to do "Suspicious Minds", he had a go himself with "Love Me Tender" (or something similar).  Deneal then came on and brought the house down with his sensational Elvis. He's not just got the voice, he's got the moves.  Karaoke man was duly made to look a bit of a twat.  Richly deserved. 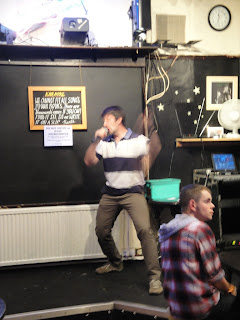 Needless to say, he wasn't keen to let his new nemesis sing again.

Um.  Nope, nope and nope.  Good records all, but I'm drawing a blank on these two.  The No Doubt songs may well have been sparked by news that they have a new album out.  Did that really call for a mash-up of the only two of their songs I can remember to play in a loop in my head?  I don't think so.

This is a marvellous record, without a shadow of a doubt.... but even with that famous scene in Beetlejuice, I'd almost forgotten that it existed.  And then my friend Tim, who I'm sure won't mind if I describe him as a white, middle-class lawyer, sang this on the stag.  He was really, really good too, but there are some accents that are probably best left unsung.