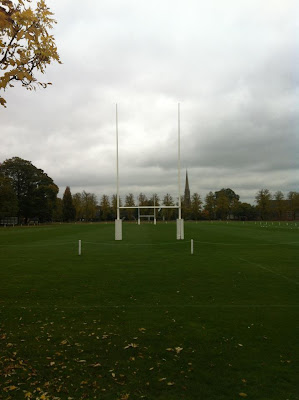 It was on this pitch in 1823 that William Webb Ellis was supposed, "with a fine disregard for the rules of football", to have picked up the ball and run with it... at a stroke, inventing the game of Rugby Football.

I played rugby on this pitch on Sunday morning, scoring a hat-trick of tries in a game of touch rugby that was part of the wedding celebrations of one of my oldest friends.  As it happens, I've played rugby on this pitch before: between 1987 and 1992, I attended Rugby School.  I wasn't a particularly good rugby player, reaching the giddy heights of the second row of the 3rd XV, but I did get to play on one of the most famous rugby pitches in the world.  Did you know that the England rugby team actually borrowed the kit of the Rugby School 1st XV - white shirts, white shorts and black socks - and that until very recently, the captain of the England team wrote to the captain of the Rugby XV to ask their permission to wear it each season? 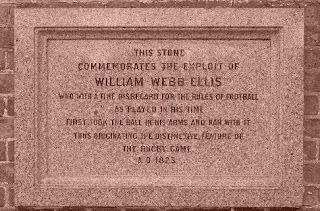 Rugby was undeniably one of the most formative experiences of my life.... but this weekend is the first time that I have been back to the place in nearly 20 years.  Make of that what you will.  Almost without exception, my very best friends are people that I met at this place when I was a pupil, but would I send my own (theoretical) children to a school like this?  No, I absolutely would not. 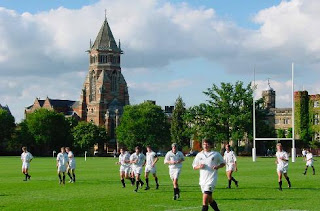 It was strange to be back.  On the one hand, the reason we were there was for a much anticipated wedding, and it was a fantastic couple of days with some fantastic people.  On the other hand, almost every single reminder of the over-privileged, entitled ninnies who attend this place - and yes, I'm well aware of the irony in that statement - makes me inexplicably cross.  I look at myself and at my friends, and I see emotional damage that has lasted for decades.  We're very close, but almost without exception, we seem to have struggled to form relationships of any depth, particularly with girls: where it has happened, it seems to have happened almost by accident.  I've been very lucky, but I'm also acutely aware that I'm emotionally closed off even to the people who love me the most.  Is that a price worth paying?

It apparently now costs something like £30,000 a year to send a kid to this school, not including uniforms or anything like that.  £30k! To be precise, it's £10,033 a term, although they do generously throw in a 5% discount when you send your third child.  That's an enormous sum of money, and I can't see how it can possibly be justified.  It was cheaper in my day, and I was a scholar too - which meant that my parents got a reduction in my fees because of my academic achievement (and which also meant that I got to have my name in capital letters in the school directory!).  Cheaper, but still about £10k a year, and I'm not sure it was much better value.

When I was here, the school was at the tail end of decades of under-investment, and the place was pretty run down.  Almost immediately after I left, the school became fully co-educational and they started converting dormitories into study bedrooms, demolished the old outdoor swimming pool to build indoor facilities and they put up some proper art facilities and things like that.  It's a school transformed, and results have improved accordingly.... not least because they started admitting smart girls instead of stupid boys.... but even if I had the money to spare, I still couldn't bring myself to send a thirteen year old child to a place like this.  My mum and dad had the best of intentions sending me away to board when I was seven years old, but that was essentially the day I left home for good: I boarded at school from the ages of 7 to 18, went straight to University and then left home.

Would I be the same person if I hadn't attended Rugby School?  Absolutely.  Would I be a better person?  Well, no one can say, can they?  Perhaps I'd be emotionally more open and a little less arrogant, but who knows?  For better and for worse, that school played a large part in making me the man I am today.  Nothing can change that now and it was a strange sensation indeed to be back. 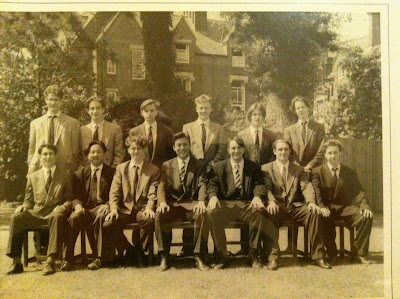 Just look at us, for heaven's sake. The past really is a foreign country: they do things differently there.

It was a great wedding, by the way.  They really threw everything at it, it was completely ridiculous and OTT and it was a lot of fun.  Good luck to them both.  The groom and I go way back, you know.  We went to school together.  I hope that poor girl understands what she's letting herself in for....
Posted by swisslet at 22:39