is this just fantasy?

I've been neglecting my life.  My real life.  A combination of work, all that running and an assortment of various other things have meant that I haven't been paying as much attention as I should to the things that really matter. 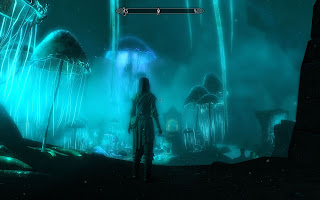 I bought the game around March this year, and since then I have apparently spent some 198 hours, 7 minutes and 22 seconds in the game.   That's more than eight full days and nights.  And that number doesn't include all the times that I've died and gone back in time to start at my last save point.  I reckon it's a pretty safe assumption that I've spent going on 250 hours in this game in the last 6 months.

That's a hell of a time commitment.

Let me tell you, I've crammed an awful lot into that time:

I've reached level 56; I've spent 96 days as a werewolf (now cured); I've looted 1497 chests; I own two houses; I've done 35 persuasions, 2 bribes, 3 intimidations and contracted 10 diseases (don't ask); I've killed 1,521 people, 607 animals, 305 creatures, 736 undead, 39 daedra and 121 automatons; I've carried out 61 assaults and 27 murders (an oddly low figure for someone who has killed more than 1,500 people).  I'm the head of the thieves guild, the head of a resurgent assassins guild, I am the non-magic practicing head of the College of Mages.  I'm a bard.  I'm an oblivion walker and a hero of the struggle against the Empire.  I'm also married, although I no longer take my wife on my adventures and leave her to run a shop in her home town.  I am the Dragon Born.  I have a horse of possibly demonic origin with glowing red eyes. 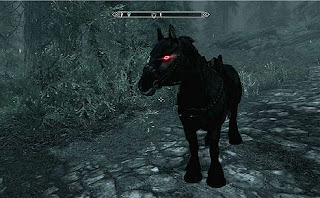 And people say I'm wasting my life!
Posted by swisslet at 21:44