nothing satisfies but I'm getting close.... 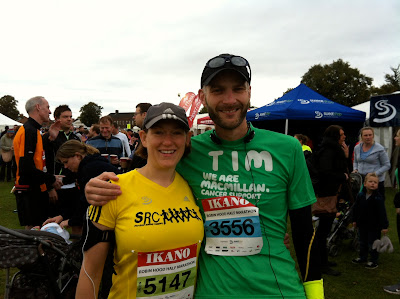 So, the race is run.  I not only survived, but managed to break my personal best by the small matter of four-and-a-half minutes in recording an official finishing time of 1 hour 51 minutes and 59 seconds.  Wounded paw and all.  As you might imagine, I'm very pleased (a guy at work asked me how I did today, and when I told him, he said "So, that's about 1:52?" and I had to stop him and say, no, that's 1 hour 51 minutes and 59 seconds....you can't round out that second. I had to sprint for that!).  I'm very sore at the moment... but that will pass too, in time.  The satisfaction will, I hope, stick around for another day or two before I pull my trainers back on.

Whisper it quietly, but I actually quite enjoyed that.  Well.  Perhaps "enjoyed" isn't quite the right word, but it definitely wasn't as much of a slog as the same race last year.  They've changed the course route this year, making it a little flatter and faster, but I'm convinced that I'm also just in better shape now than I was then, injury notwithstanding.

Some tedious post-match analysis (as tracked on my iPhone):

To run a 2 hour half marathon, you need to maintain an average pace of 9m9s miles throughout the thirteen-and-a-bit miles.  I think one of the things I'm most gratified by with this run is that I only ran one mile - the last - at a pace slower than 9m per mile, and even then it was quicker than 9m9s.  Of course, by the time you get to the last mile, your body is pretty tired... but by way of comparison, I ran the same mile last year at a pace of 9m56s per mile.  That's a lot slower.  My average pace overall is much improved: from 8m51s per mile last year to 8.35 this year.  That might not sound like a lot to you, but I'm really pleased by the step-change in my running.  Because of the problems I've been having with my foot, I was reluctant to set a target time for the race, as I really didn't know what I might be capable of.  To be fair, I probably would have been disappointed if I hadn't beaten two hours, but to run this much quicker is fantastic.  Maybe 1hr 40 something next time, eh?

Part of the reason for the quicker pace was that I ran about 10 miles of the race alongside a guy I vaguely know.  We didn't do a whole lot of talking, but just as training with Running Club has made me work harder and run faster than running on my own, so having one guy to keep in sight probably made a small but significant difference... at times I was towing him along, but at other times I was tracking him, and between the two of us I think we both went faster as a result (although he had enough gas in the last mile to beat me by about 30 seconds, I think).  He did make me laugh though: after 8 miles, he turned to me and remarked that he'd only just noticed that I had my name on the front of my running vest... up to that point he said he'd thought I must be some kind of local celebrity because as we ran along, people kept shouting encouragement out to me by name.  Actually, that was fun.  I'd recommend that the next time you do something like this, you put your name on your vest in massive, easy-to-read letters too.

Anyway.  Enough running geek-talk.  Thanks to the generous support of people like YOU, I've also raised about £1500 all-in for Macmillan Cancer Support.  I run partly for the personal challenge, but to raise money like that is very satisfying, that's for sure.  It's a great charity and you can still sponsor me HERE.  That post-race beer tasted very sweet indeed this year (although I'm not sure why a week on the wagon should be so damn difficult... it's only a week, for goodness sake!  That shouldn't be hard, right?)

C. did really well too: smashing her personal best by something like eight-and-a-half minutes to come in at 2 hours 06 minutes and 28 seconds.  A fantastic effort, I think you'll agree.  She's also raised something like £770 for the MS Society and a further £400 for a (different) cancer charity.  The foolish girl is also running another half marathon next Sunday, this time in London.  She claims that she hasn't got sore muscles at all after yesterday, but I certainly don't envy her the task.  I'm going to stay at home and try to buy us some Glastonbury tickets instead, I think.

Email ThisBlogThis!Share to TwitterShare to FacebookShare to Pinterest
Labels: C, exercise as therapy, we do not talk about running club, worthiness