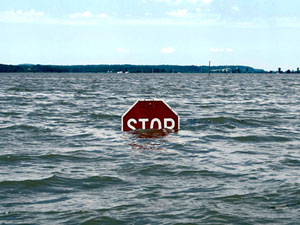 In the end, I suppose it’s funny how close we were to disaster all along. We used to think of ourselves as living in a time of great enlightenment and pat ourselves on the back for having the great good fortune to be living at the very highest pinnacle of civilization. When push finally came to shove, all it took was a bit of bad weather and we were back in the Dark Ages.

We knew we’d been fucking things up for years. Decades. Of course we did. Sure, there was the occasional fuckwit who would deny the obvious, but it was plain to anyone with eyes – anyone with half a brain, anyway - that we were sowing the seeds of our own destruction. Not that anyone really did anything about it, obviously. Knowing we were doing it and actually caring enough to do anything about it are two completely different things. At heart, we’re pretty much all wishy-washy liberals; we like a good bit of hand-wringing, and we rather self-righteously give our friends toilets in Burundi or Llamas in Peru for Christmas, but in the final analysis, there simply weren’t enough people willing to really make a change until it was too late.

It had been steadily getting wetter for years. Our response? We built flood defences; we put up walls and dykes to try to keep the water out. Nature built flood plains and we put houses on them. No one wants their ground floor ruined by an inconvenient flood every year, do they? There are only so many sandbags a man wants to have at his garden gate before he wants someone to do something more permanent.

That worked for a while, but the water kept rising. Eventually, the day came when we couldn’t hold it back.

We like to think we’re pretty civilized, but the truth is that we were always only three days away from disaster. When the food starts to run out, it’s every man for himself. The panic buying started almost immediately, of course… queues in every forecourt and every supermarket within hours of the first report that supplies might be limited. Two days of this and people began to get hurt.

Looking back on it now, it seems like a distant dream. Can you imagine, my son, that back in the day we used to be able to walk down the road and spend our money on fresh bread. What’s money dad? What’s bread? What’s a road?

Winter is drawing in. It’s coming earlier every year now. Well, that’s my guess, anyway. The days seem shorter and shorter and the seasons seem to turn so fast. The waters are cold all year, but the ice is coming. I seem to be hungry most of the time, but when the waters freeze, life become almost impossible and the will to survive flickers like a candle in the wind. Central heating seems like a joke to me now as I huddle in the timbers of my boat, hunkered down against the howling wind and wrapped in a tatty, inadequate blanket. Hot running water whenever you want it. A shower. The memories of many of these comforts are fading from me now. It does you no good to remember the things that you want to forget.

And still I persist.
Posted by swisslet at 20:58