The plantar fascia is the thick, fibrous connective tissue on the sole of the foot. It originates on the bottom surface of the heel bone and extends along the sole of the foot towards the toes. As my dad - a doctor - keeps telling me, it's not a tendon: it's a fascia - as if that particular piece of medical pedantry makes me feel any better. 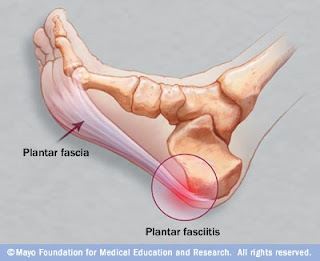 For the first 38 years of my life, I can't say that I have given this particular part of my body a great deal of thought. It's just sort of there, isn't it? Why would you think about it all that much? Oh, how quickly things can change. Now I think about it a lot: mostly when I first wake up in the morning and get out of bed, but also with every step that I take when I go out running. I may not have known much about it before, and I suppose I don't really know all that much about it now, but what I do know about it, is that when it become inflamed - as it has been in my left foot for the last six months - it is both very painful and extremely hard to shift.

As Dr Wiki tells me, the pain is usually felt on the underside of the heel and is often most intense with the first steps of the day... for me it feels a little bit like walking on the blade of a knife.  I'm not that steady on my feet in the mornings anyway, but this definitely hasn't helped. Apparently another symptom is that the sufferer has difficulty bending the foot so that the toes are brought toward the shin (decreased dorsiflexion of the ankle). A symptom commonly recognized among sufferers of plantar fasciitis is an increased probability of knee pains, especially among runners.

I have a stiff left knee, sore calves and reduced mobility in my left ankle.  I scuff my left foot a little when I run, which I've been putting down to MS fatigue causing me to 'drop' that leg a little (a fairly common symptom).  I've assumed that it's this scuffing that has been causing the wear and tear on that side of my body.  Perhaps it is, but a bio-mechanical assessment also told me that I have very high arches in my feet, and that when I run, these collapse a little, resulting in my left leg being about 2cm longer than my right leg.  Well, that goes a pretty long way to explaining the scuffing, anyway.  I've been wearing insoles in my shoes to try and correct this since August time, and I think it's helping to some extent, but it seems that the damage to my plantar fascia is done and won't clear up that easily.

I've tried icing it, rolling it, stretching it, wearing a night splint to stretch it out.  I've even tried having acupuncture needles stuck into it and used to stimulate it.  Yeah, that was every bit as unpleasant as it sounds.  Nothing seems to make any difference.  I haven't stopped running, obviously... although actually the act of running stretches it out and temporarily eases the pain.  A bit.

A guy at the gym saw me massaging the sole of my foot in the sauna and started up a conversation on the subject.  Apparently he suffered really badly, but there's this thing you can get (on the NHS) at Queens Hospital in Nottingham where they take blood from your arm and inject the plasma into your foot, and it's like a miracle cure.  I had been resigned to toughing this out until it went away, but this conversation actually inspired me to get my arse down to the doctor to see if we could do anything.  The plasma thing remains my plan b, but on Thursday morning, I'm going to have a steroid injection into the sole of my foot at my local doctor's surgery to see if that helps.

Apparently the injection can be very painful, but this has been so annoying that I'm prepared to give it a go.  I'm tired of limping around the place and I'm not going to take it any more!

I know I whine a lot on here about my MS.... so I suppose, in way, it's nice to be able to moan about something mechanical which (probably) has nothing at all to do with my chronic neurological condition and is instead simply about the fact that I'm not getting any younger and I'm putting a lot of miles on the clock.  I'm 6 foot 5 inches tall and weigh the best part of 85kg.  That's an awful lot of force to be throwing through my body when I go running... I suppose it was always going to be a matter of time before I broke something.

I'll not be stopping running, clearly.  I'm not dead yet.
Posted by swisslet at 22:44