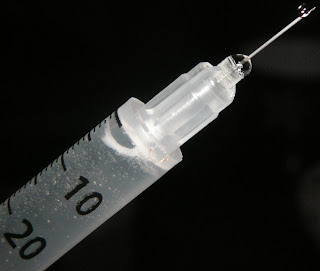 Phrases you never want to hear from a doctor, especially when he’s standing poised over the sole of your foot holding a heavy-gauge needle that is fully two inches long:

“I’m afraid this is going to hurt”

He pushed the needle straight into the side of my foot to access the sore spot on my tendon. That hurt. He pressed down on the plunger to push the steroid into my foot. That really hurt. It brought tears to my eyes, but I’m a brave little soldier and I barely let out a peep. You would have been proud of me.

Now, I'm not scared of needles: after all, I inject myself every week; I've had a needle pushed through the iris of my eye whilst I was full conscious - I've never had a better incentive to keep still.  But this.... this stung.

The doctor kept on casually chatting as he worked.  “There’s local anaesthetic mixed in with the steroid, which should help in the short term too. It will probably take a couple of days for the steroid to take effect.”

As it’s the whole pushing-the-needle-in bit of the procedure that hurt, I was a bit mystified by the purpose of the local anaesthetic after that bit had already been done and surely the worst was over…. But a couple of hours later, when it wore off, I realised why they put it in.

Some people say that pain is just weakness leaving the body.  Those people are clearly IDIOTS.

I really hope this works. Apparently there are three possible outcomes: total fix, temporary fix for a few months or no effect at all.  Fingers crossed, eh.  It is a touch sore at the moment, mind.  I'm sure that will pass in time.

All things must pass. 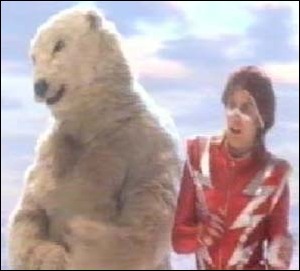