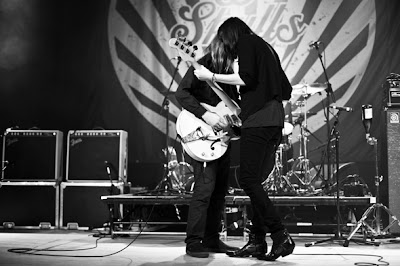 As I mentioned last week: I've been having a bit of a dry spell on the gig front.  Last week's Elbow show was my first since 1st April.  Now, I don't live for live music; I don't need to go to several gigs a week or anything... It's just that I really want to be going to gigs at a rate somewhat greater than the two shows in 10 months I've managed so far in 2012.  I enjoyed Elbow last week and I came home with renewed determination to look at the gig listings in Nottingham a little bit more often and a little bit more carefully.

My opportunity came up a little sooner than I was expecting.  Gordon mentioned on Facebook that he and Kirsty had just enjoyed a fantastic show by Band of Skulls in Glasgow.  Ah, I commented, they're on my list of bands to see.  Well, said Kirsty, as it happens, they're playing Nottingham next week.   The show was sold out, but a quick visit to eBay turfed up a ticket for sale at a very reasonable price.... so I bought it.  Sometimes the internet is amazing.

I'm not sure if I've ever been to a gig on my own - festivals aside.  Well, I'm not so shy and retiring that I was going to let something like that get in the way of seeing a band that I really want to see.

It seems that the Rescue Rooms has been refurbished since I was last there (June 2011? Really? Good grief): the bar has been moved to the back of the room and the light and sound desk to the side.  It works pretty well, actually.  It was an early show, with the band due to come on at about twenty past eight, and as always, not everyone seemed to know that, so there was plenty of room to find a slot towards the back, leaning up against a wall.  I was expecting a relatively young audience, but I reckon they must have been featured in Q magazine at some point, and £50 man was present in some numbers.  Yes.  I am aware of the irony in that statement.

I like Band of Skulls.  They're a three piece: Russell Marsden on guitar/vocals, Emma Richardson on bass/vocals and Matt Hayward on drums.  They sound a little bit like the White Stripes, and when they're going full bore, they make a hell of a noise (See: "I Know What I Am" or "The Devil Takes Care of his Own" or "You're Not Pretty But You Got It Goin' On").  They do slower songs too, and they're pretty good too, but in my opinion - and it's probably just a matter of personal taste - they're not quite as good.  I really enjoyed their first album, "Baby Darling Doll Face Honey", and I quite like their second album "Sweet Sour", but their second album has a much higher proportion of their quieter songs, and as a result, I like it less and have listened to it less too.  It's good, sure.  In fact it's really good.  It's just that I like them when they're...well... louder.

I guess the same applies to the gig: they're a really good live band, and I'm really pleased that I've got to see them in a (relatively) intimate venue like the Rescue Rooms.  They're a good, tight unit: Marsden is a good guitarist and Hayward is the kind of drummer who, between slugs of red wine, hammers seven bells out of his drum kit.  This I like.  There's something classic about a three-piece rock band too, and Richardson on bass looks like a lost member of the Ramones (even if she occasionally seems a bit anonymous).  When they go for it, they sound fantastic, and the crowd responds.  The rest of the time, the crowd is oddly subdued though; respectful and attentive, perhaps, but actually I think there's also something missing in the show tonight and the crowd mood reflects that.  Maybe it's the set pacing.  We start off strongly, with "Sweet Sour" opening the set and "Patterns" played third, but there's a long section in the middle of the set where the slower songs - good though they are, and well played though they are - suck some of the life out of the crowd.  Maybe that was just me.  They've sure got some tunes though, quiet as well as loud.  I just wish there were more loud ones.

Bottom line 1: I enjoyed the gig and I'm really glad I went.
Bottom line 2: I am determined to listen to "Sweet Sour" a whole lot more as it sounded really good played live.  They're a good live band.
Bottom line 3: I like loud rock music.  Well, I like all kinds of music, from Scott Walker through folk, soundtracks, comedy songs and all the way back out the other side.  When it comes to Band of Skulls though, I just prefer their rockier side.

I seem to have broken my gig rut too: I already got Django Django booked for February and the Eels for March.  Bring it on!