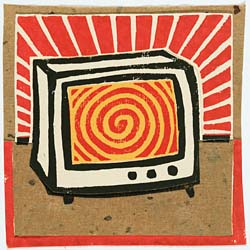 Having shown pretty much zero interest in these human trivialities before, after discovering the television last week, my cat is now fully multimedia.  I'll go into the front room and turn the light on to find that my cat is way ahead of me and is sitting about a foot in front of the TV, looking over her shoulder at me expectantly, waiting for me to turn it on.  Nature documentaries remain her favourite, but apart from that, she's not especially fussy about what's on.  She watches it all.  Mesmerised.

Mind you, she's not a fan of adverts: when the ads are on, she loses interest in the television, idly washes a paw and then perhaps hops onto my lap.  This is usually short-lived.  When the ads finish and the programme resumes, she'll hop off my lap and resume her position just in front of the TV.  She does the same thing with end credits too.  Strange cat.  Mind you, I don't really watch them either, so who am I to criticise?

She's obsessed.  I've started finding her alone, in front of the switched off TV, just waiting for something to happen.  If it magically comes on, she'll be ready.

Another cat post, Internet.  I'm really spoiling you.
Posted by swisslet at 21:47