the shaving razor's cold and it stings....

Did I mention that the beard has gone?

As soon as we got home from spending Christmas with my parents and my brothers and their families, it got the chop.  Boxing Day.  I started growing it just before Christmas last year, and it seems that about a year is my beard tolerance level.

Apart from anything else, I really just wanted to get my hair cut really short.  Having a beard kind of cramps your style from that point of view: I don't know what you think, but I reckon that when someone's beard is longer than their hair, unless they have a completely shaven head, it just looks weird.  So I chopped the beard off, and the very next morning popped out to get my head clippered too.

I think my wife was a bit alarmed.  She's joked about how my beard worked because it made my cheeks look less sunken, but I think that over the course of the last twelve months, she actually got used to the beard to the extent that, when I was threatening to shave it off, she said that it was a bit of a shame as she kind of liked it.

Too bad.  I'd had enough.  Beards, brogues and tweed caps might well be all the rage, but I will now officially only be rocking two of the three on-trends.  I will be accessorising with a Paul Smith modal scarf in signature stripe with frayed ends, mind.

When I got back from the barber, she took one look at me and told me that I looked like I had cancer.  "Leukemia chic", I think she called it. 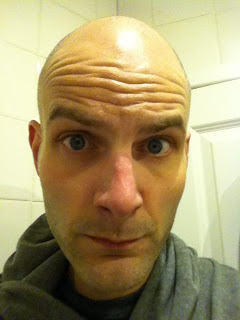 Well, anyway.  I'm enjoying being out from underneath it.  You have facial hair like that for too long and you sort of get trapped behind it as people forget what your face looked like without the fuzz.  Well.... mine looks kind of the same as it's always done: sallow, sunken-cheeked, thin-lipped and with a big, red, wonky hooter.

.....on reflection, perhaps I should grow it back.  Bigger and bushier and more all-concealing.  Gandalf-stylee, perhaps?  I am going to Canada in March.  That's long enough to grow a three foot beard that I can tuck into my belt, right?

What do you think, Internet?
Posted by swisslet at 19:13