your scarf it was apricot... 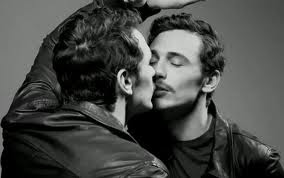 James Franco has written a poem to commemorate the inauguration of President Obama.  Yeah, THAT James Franco.  You know: actor guy from films like Spider-Man and Pineapple Express, disastrous co-hosting stint at the Oscars with Anne Hathaway, crappy Gucci adverts..... that guy.

Well, apparently he's quite the renaissance man: he studied for a Masters at Colombia University, is studying for a PhD at Yale and teaches a class at UCLA.  He's working very, very hard at not just being a pretty face.

[SIDEBAR]: I actually met his ex-girlfriend in a bar in New York last year.  Her new boyfriend is the guy who died in Private Practice and was in the film The Help and stuff like that.  He's a friend of a good friend of mine, and we were hanging out in a bar drinking Brooklyn gin.  Lest you think I'm a name-dropper, I had no idea who he was, and told him so.  He was sickeningly good looking too.  The bastard.  Anyway.  Here's what I learned about James Franco from this girl: "He's a bad friend and a bad boyfriend".  So there you go.  But I digress.  [/SIDEBAR]

So yes.  James Franco - that James Franco - has written a poem for President Obama.  It has been roundly ridiculed, of course.  He's a very easy target and the poem is...well.... see for yourself.

---
Obama in Asheville by James Franco

Asheville, North Carolina, is the birthplace of Thomas
Wolfe and the sometime residence of F. Scott Fitzgerald
When he visited Zelda at her institution;
He stayed at the Grove Park Inn, a grand stone edifice.
On the phone once, Cormac McCarthy lamented
The two added wings and the spa, and marveled
At the original structure, They pulled the stones
From the mountains and brought them down on mules.
Soon after his fortieth birthday, Fitzgerald attempted suicide
Here, but couldn’t shoot his own head, drunk, I guess.
Later, after he was actually dead, from alcohol,
Zelda perished in a fire at her institution, one of nine.
*
Asheville is the place where the Black Mountain College once stood
And helped birth Rauschenberg, Twombly and Johns,
Cage and Cunningham; now I think it’s a Young Men’s Christian Association.
On the wall of the Grove Park, they have pictures of the famous guests;
I’m not up there, but Obama is. I was asked to write something
For the inauguration of his second term, but what could I write?
I was in Asheville, studying writing, but not the political sort;
I write confessions and characters, and that sort of thing.
I wrote my friend Frank about what I could do, but he was unresponsive.
I went to class and then the little burrito place where they know me,
And finally at night I got Frank’s email on my phone and pulled over
On the side of Warren Wilson Road, past the school barn with the WWC –
That I couldn’t see in the dark — right before the school entrance;
A little spot where there’s a path that leads to a lake called Snake Lake.
First I called my class at UCLA, and told them to watch Apocalypse Now,
And that it used Heart of Darkness as a model, and that we’d watch
Eleanor Coppola’s Hearts of Darkness, the making-of, the following week.
Then I read Frank’s note. He said he was sleeping twenty hours a day,
With no symptoms except that he desired sleep
And just a little more sleep. He’s in his seventies.
Then he said that my poem was a difficult task.
How to write about a man written about endlessly;
A man whom everyone has some sort of experience of;
How to write so that it’s not just for the converted.
*
I met Obama once, in D.C., the Correspondents’ Dinner.
I was the guest of Vanity Fair, guided through D.C. by the wife
Of Christopher Hitchens, when he was alive. We went to Hitch’s place,
He had books from floor to ceiling, and said he had read
To Borges, when he was blind, Old Icelandic Eddas—
Then we waited in a private room with the likes of Tom Cruise,
And Katie Holmes, and Claire Danes. When Obama entered
The crowd converged. Finally, I got to shake his hand,
He knew me from Spider-Man. I asked him for advice,
I was scheduled to give the commencement speech at UCLA
And there were some undergraduate knockers against me;
He had been denied the usual honorary degree by Arizona State
Because he hadn’t accomplished enough, so I wondered
How he dealt with detractors. He smiled his smile and said,
“Humor.” Well he’s damn right, and I wonder how much
That stand-up comedian is laughing in the face
Of this big country. Because he is one man and we are many,
And a great servant of the people—he’s a president, not a king—
And doesn’t need to face what King Charles once faced.
(Frank suggested I examine Marvell’s semi-inauguration poem for Cromwell:)
That thence the Royal actor borne
The tragic scaffold might adorn:
While round the armeÌd bands
Did clap their bloody hands.
That most famous stanza, and then:
But bow’d his comely head
Down, as upon a bed.
And he was beheaded, good-bye Charles.
*
If I were to act in the film about Obama,
All I would need to get down, aside from the outer stuff—
And I know that’s important—is his essential kindness,
I’d let the writer put in all the political crap,
And the specific things that he was up against,
All that stuff on CNN and the Huffington Post,
And I’d say the lines that were written, just like Obama
Reads his lines, but what would really put the role over
Would be the goodness at its core.
That’s what will be remembered.
Yes, his race, no one will forget. But the soul too.
I’d win the Academy Award if I just captured that.

Right.  Well.  As poems go, it's pretty self-referential - the president recognises him from Spider-Man, you know - and it has the general air of someone trying desperately hard to impress you with their learning, whilst at the same time keeping it real by talking about burritos and stuff.

If it had been by Ethan Hawke - who I loathe with an irrational passion nearly as great as Hawke is pretentious - then I probably would be howling with laughter.  But, you know.... this is really growing on me.  He's put himself out there to be laughed at - and boy, people are laughing - but I think it's kind of nice that this world-famous actor thinks so much of Obama that he's prepared to put this up for public consumption.  That's sort of sweet, isn't it?

...either that or he's so self-obsessed and lacking in self-awareness that he just doesn't realise how awful and ill-judged the whole thing is and just generally thinks he's amazing and talented.

No.  Let's be generous.  I like it.  It's awful, pretentious cobblers, and if he had another pair of lips he'd kiss himself, but I still find myself oddly drawn back to it.

I need to read something worthy to cleanse myself.  Perhaps some F. Scott Fitzgerald.  Then I could eat some junk food and write a poem, perhaps?
Posted by swisslet at 19:17