that make you Tom the curious, that makes you James the weak... 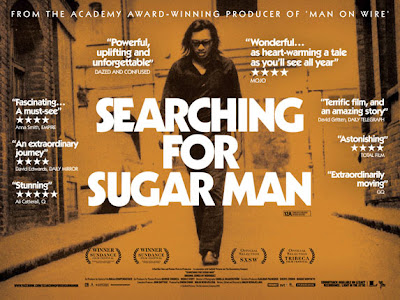 I finally watched "Searching for Sugar Man" yesterday.  It's much garlanded already, so you hardly need me to tell you that it's worth watching, so I won't.  It is an amazing story though: the idea that a musician like this could be completely obscure - completely and utterly unknown - in his own country and yet enormously successful in South Africa, where his music had become a symbol of the struggle against Apartheid some 25 years after it was originally recorded...well it's almost completely unbelievable.  Everyone thought he was dead, but it turns out that he was alive and well and living in Detroit, working as a manual labourer.   It's a very moving story.

What really struck me, as well as the incredible humility of Sixto Rodriguez himself, was the story of how his music slowly became hugely significant in South Africa.  They knew nothing about him at all.  Nothing.  All they had to go on was his picture on the cover of his records, the names on the back of the album and the lyrics themselves.  They had nothing else to go on but they wanted to know more - not least his supposed death by committing suicide onstage.  This was about 1998, and whereas nowadays all you would have to do is to reach for Google, in South Africa back then, an appeal went out through the unlikely medium of some new sleeve notes written for a South African re-release of Rodriguez's second album and the whole thing just snowballed from there.  Like I say, it seems scarcely believable.  I had a website of my own in 1995, for heaven's sake.  Google was up and running.  How could they know nothing?  This guy had a record contract with a proper record company in the USA in the 1970s, released two full albums and played innumerable gigs around Detroit.  How could people know so little about him, even in Apartheid South Africa?  In today's data flooded world, it just seems so hard to understand.  He may have sold no records at all, but surely there was a paper trail of some kind?  Well, apparently not.

Anyway.  If you're interested in the details, watch the film.  It did make me think though: how often do you hear music that you know absolutely nothing about?  Something where you can't filter what you're hearing through what you know (or think you know) about the artist?  I suppose the closest I get is the local bands I review for Leftlion, but even then, most of them have got a Facebook profile, so you can at least read what they think of themselves and what their influences are.  I don't know much about them, but they're not an entirely blank canvas.

For these South Africans, Sixto Rodriquez was a complete unknown: all they had was his music, rumours of his death and how they thought his lyrics were speaking to them and directly to their situation in Apartheid South Africa. Word got around because people made bootleg tapes and passed them around.  That doesn't really happen any more, does it?  Twitter, YouTube, Facebook, Spotify, Soundcloud, MySpace.... once word gets out, it's surely never been possible for it to spread further and faster than it does today.  I guess there are still plenty of brilliant musicians living in obscurity today, but it's surely never been easier to make your music available to the world, whether or not anyone chooses to listen to it.

I suppose it's pointless to wonder if that's a good thing or a bad thing because that's just the way things are.... all the same, the story of Sixto Rodriguez wouldn't quite be as romantic today, would it?  If you could just google the guy and come upon his twitter feed and his flickr photos, then it wouldn't really be same at all.  I think a large part of the story's appeal comes from the mystery and a strange series of events across continents that, if you read it in a novel, you would probably deem ridiculous.  But there it is.  Would it even be possible today for an album to sell 500,000 copies somewhere and for everyone to think he was dead?  Doubtful.  No record company or publicist would allow that.  Even if the artist wasn't interested in the money, someone damn well would be and he'd be contractually obliged to appear on Graham Norton and Jonathan Ross and Loose Women.  He wouldn't be allowed to slip between the cracks.

You'd imagine that Rodriguez himself would be delighted to be discovered - think of all those royalties he must be due and the merchandise he could flog.  That's the absolute best part about this though: although clearly pleased to be able to play his music to appreciative audiences, he's clearly not the least bit fussed about material things and is not at all bitter that he's led a life of hard physical labour and not of pampered musical superstardom.  Mick Jagger he most definitely is not.

It's a brilliant story.  His music is really, really good.  Properly good.... and I'm very much looking forward to the chance to see him with my own eyes at Glastonbury this year.

It's a brilliant film and an amazing story.  But you probably know that.  Everyone knows that already, right?
Posted by swisslet at 20:27