the fallen angel watching you... 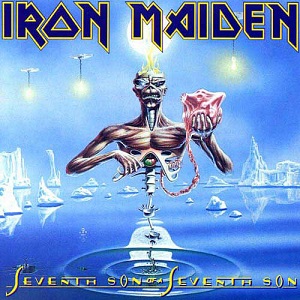 You know that feeling when you hear something that gives you a real jolt and you suddenly realise how old you are getting? Usually this happens to me when I’m foolish enough to make idle small talk with my colleagues at work. I’m terrible at small talk, but in the interests of filling a potentially awkward silence, I might innocently ask someone how their kids are doing:

“Oh, Leah is now fifteen…..”
At this point, my eyes will widen in horror as I realise that I can remember when this guy had the time off work for Leah’s birth. Which means that not only have a whole fifteen years passed, but they’ve passed with me working with a lot of the same people.

This morning I heard that “Seventh Son of a Seventh Son” is twenty-five years old this month. A quarter of a century! What?!  There's a good article about it on the Quietus here (cheers for the link, Mark)

When it was released in April 1988, I had just turned fourteen. Barely months before, I had bought myself a cassette copy of “The Number of the Beast”. This was a big deal. My music collection at the time either consisted of things that I’d taped off the chart show on radio one or a handful of cassettes. Actually, if I think about it, I reckon I could name them all in order of acquisition:

I also had a share in a couple of seven inch singles: the first Band Aid “Do They Know It’s Christmas” and the Frog Chorus.

“The Number of the Beast” was the first time that I went out on my own and bought something entirely of my own choice and without any kind of influence from anyone. I hadn’t even heard any of their music – I just liked the cover – but it opened up a completely different door and set me off in a musical direction that has largely stuck with me ever since.

“Seventh Son of a Seventh Son” was the first Iron Maiden album to be released after this momentous purchase, and I quickly added it to my collection on cassette (CDs weren’t really a thing yet and I’ve never owned a record player). Thanks to the success of the single, “Can I Play with Madness” (and its accompanying promo video featuring Graham Chapman shortly before his death), I was also able to watch the band on Top of the Pops - still a thing in those days, if you can imagine that. I also started putting Iron Maiden posters on my wall, starting with the Seventh Son poster itself, but quickly branching out into Aces High, The Trooper, Somewhere in Time, Piece of Mind, Powerslave… sometimes before I even bought the albums themselves, although they followed soon enough.

I can remember being fourteen, and to be honest I wouldn’t go back there for any amount of money… but at the same time it seems incredible to think that it was twenty-five years ago. I’m so old. Although, not as old as the band themselves, of course, who are playing this album more or less in its entirety on their current “Maiden England” tour.

Twenty-five years. I doubt the fourteen year old me would recognise the 39 year old me if he passed me in the street, but I’d know him from his bad hair, bad skin and terrible glasses (I may have no hair now, but frankly that's an improvement.  I also don't wear glasses now and I've got better skin.  I'm even thinner, for goodness sake....). Poor kid. He doesn’t even realise that his whole life is still in front of him.

If I get the chance, I might even tell him that it’s okay to speak to girls.

It is okay to speak to girls, right?
Posted by swisslet at 19:28

Email ThisBlogThis!Share to TwitterShare to FacebookShare to Pinterest
Labels: back in the day, me, memories, music