no more unethical treatment of the elephants.... 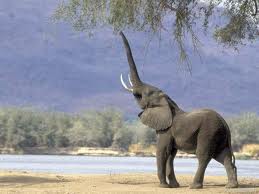 Like any large business, an inordinate amount of time seems to be spent trying to decide what box to put people in. This starts with the recruitment process, but it isn’t too long before you’re learning your Belbin preferred team roles, your Myers-Briggs type and whatever other models are fashionable at any given point. A few months ago, the senior managers in our department all started carrying around a little book that helped you to understand what kind of animal you were. There were four options: lion, dolphin, elephant or monkey. You answered a few questions and then you could learn the insight that your “animal” threw onto your management style. I can’t even remember what animal I came out as, but the whole thing is clearly bollocks, isn’t it? Well, the author had thought of this and covered off this possible criticism in his introduction.

I forget now what the four races were (Caucasian, Mongoloid, Negroid and Austroloid, I think…), but I’d read enough. This was such manifest bullshit that it was actually funny. What happens when a Caucasian person and a Negroid person have children? How do you determine the race then? At what point do you decide you need more than 4 categories to catch the subtleties of the entirety of humanity? And what on earth has this nonsense got to do with management styles? Is it relevant to wonder what happens when someone of type “Lion” hooks up with an “Elephant”? For my money, this is tip-toeing frighteningly close to eugenics.  It’s bollocks, and the people who actively subscribe to this stuff should be as kept as far away from management roles as possible.

Anyway. One of the colleagues I’ve been working with mentioned to me that she was about to run a Myers-Briggs session for another team (she works in HR). She decided to have a go at guessing my “type” and came up with ESTJ.

ESTJ
Practical, realistic, matter-of-fact. Decisive, quickly move to implement decisions. Organize projects and people to get things done, focus on getting results in the most efficient way possible. Take care of routine details. Have a clear set of logical standards, systematically follow them and want others to also. Forceful in implementing their plans.

This compares to the actual type I came out as when I last sat the test.

INTJ
Have original minds and great drive for implementing their ideas and achieving their goals. Quickly see patterns in external events and develop long-range explanatory perspectives. When committed, organize a job and carry it through. Skeptical and independent, have high standards of competence and performance – for themselves and others.

I tend to think that, on balance, the whole thing is basically nonsense and subject to so many variables as to make the attempt to put me in a box something of a waste of time, but I suppose this is passingly interesting up to a point.

I’m definitely an introvert (the “I” as opposed to “E” for extrovert)… this doesn’t necessarily mean that I can be found in the kitchen at parties, but it means that I often find social interaction with people very tiring, whereas apparently extroverts derive energy from this kind of interaction.

I mentioned this to my wife. Her response?

Charming.  I rather tartly retorted that she has no idea what I’m like at work, to which she wondered who saw the better part of me.

Mind you, I suppose the problem is not tests like these themselves, it’s when people take them at face value as offering any sort of genuine insight into how somebody ticks. Even the best observed, researched and tested of these tests is still shooting in the dark when trying to understand something as complex as the workings of the human brain. Still, you get to bring in some consultants to sell you this bullshit in a flashy presentation at your big team meeting, you hand out copies of the book to the members of your management team and it saves you from actually having to come up with your own insight and observations on the individuals you manage, I suppose.  Why use your own brain when you can recycle something from elsewhere?  That's pretty much the only rule in the management handbook, isn't it?  Original thinkers need not apply.

Nah.  Personality typing isn't really for me. The Man ain’t gonna put me into no box. A census taker once tried to test me. I ate his liver with some fava beans and a nice chianti.